I made Mom a bandsaw box for her birthday earlier this year, and I thought it would be fun to try another one for her Christmas gift.

This box, like the last one, came from David Picciuto‘s bandsaw box book. I found this one quite a bit easier than the last one and I think it looks a lot better. I attribute that to having slightly more experience and a couple tips that I got from David over email about how to make smooth curves on the bandsaw.

I don’t have a good picture of it, but when this was all done, I took it to the laser cutter at work and engraved the date on the bottom of one of the feet. 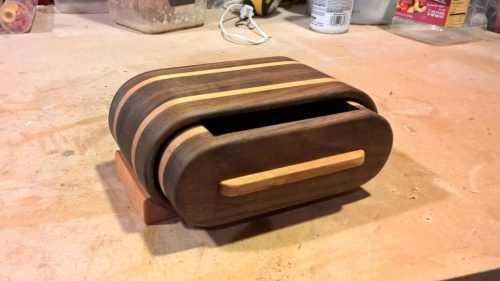 As soon as I unpacked my bandsaw last summer, I was eager to try some projects that really made use of it’s unique capabilities. While I’ve done quite a bit of resawing, I still wanted to try to make a bandsaw box. Bandsaw boxes are generally curvy and they have drawers that perfectly fit the shape of the curve. If you’re a woodworker, it makes you stop and think “Wait… how did they do that?”

I received David Picciuto’s bandsaw book for Christmas and dug in. There are a series of builds and I started off at the beginning. I learned a lot while making the box and I know my next one will be better, but I still thought this would make a good gift for Mom. The wood is a combination of walnut and plywood. The interior is covered with black flocking. Happy Birthday, Mom! 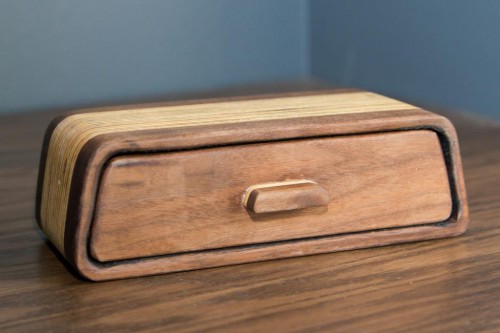 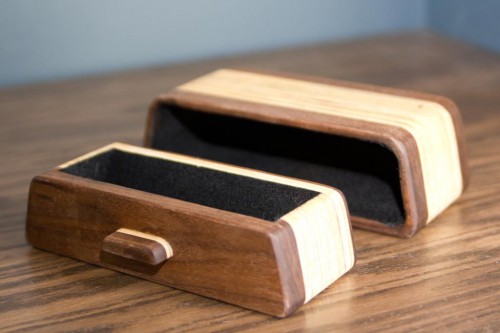 Every year as a parent is different, but I feel like 2016 was easier than the previous years. I hesitate to say that because a wise man once told me that “Parenting never gets easier, it just gets different.” But we did knock a few big issues off the list. Elijah has been battling some intestinal issues for about half of his life and we finally have those under control. That made potty training interesting but we’ve been diaper free for two weeks now! He’s not totally independent yet, but it’s nice to not lug around extra diapers everywhere we go.

The other big changes were at night. We used to spend 60-90 minutes on an average night trying to get the kid to fall asleep. It was always a battle. Now he zonks out in 5-10 minutes and he’s sleeping better at night too. We used to plan on him waking up multiple times and then being up for good at 4:45 or 5am. Now that’s very rare and some mornings he even makes it to 7 or 7:30. It makes such a difference to go into the day not feeling like you got run over a truck every night for the last week.

This was also the year of bikes for Elijah. We got him a balance bike quite a while ago but this summer, it finally clicked and he got the idea of coasting around on it. After that, he quickly got more confident on the bike to the point where we thought we’d see if he could handle a pedal bike. That was his big Christmas present and he has been successful almost from the beginning. Every day he picks up a new skill and he’s pretty independent on it now. He’s quite happy to spend an hour or two at a time pedaling around on that little bike.

After a lot of research, haggling and waiting, I finally took delivery of a 2016 F150 and traded in my trusty Subaru. It’s a luxury purchase that I’ve looked forward to for a long time and I still smile when I see it parked in the driveway. I’ve put it to a lot of good use already and love the flexibility i have to get various projects done. It’s also nice to have the option of moving 6 adults around comfortably.

Woodworking has continued to be a good choice of a hobby. I find it immensely rewarding, I can do it right in the garage, and I can find something to do even if I only have 15 minutes. I have devoted an entire bay of the garage to woodworking and while you never have enough space, I feel blessed to have an area like that work in. This year’s projects included two bandsaw boxes, a play table that fits over our coffee table, cribbage board, toy shelf, Post It holder, garage sign, garage cabinets, dump truck, Otis sign, purple box and some other stuff that I haven’t gotten around to posting yet. I didn’t add many tools this year as I have a pretty full collection but I think I’ll be adding a CNC machine early next year.

This year I felt less guilty about spending time in the wood shop. As a parent, it can be hard to find the line between spending time with your family and taking time for yourself. But that time for yourself IS an important part of being a good parent. If you’re not working on improving yourself, taking time to think, and working on projects that you enjoy, you’re not going to be in a good spot mentally to give your family the best of yourself. It’s a dial that I constantly need to adjust, but I think it’s important to keep it in mind.

Here are few more highlights from this year:

I say this every year, but I want to do more hiking next year. This was probably the last year that I’ll be able to carry Elijah in the backpack so that will change things a lot, but I’m hopeful that he’ll enjoy hiking and we can go on some adventures together either with Tyla or while she enjoys a restful afternoon by herself. Our first tent camping adventure was a success so we need to do that again as well. And who knows, maybe next winter we’ll get Elijah out on some skis too.

The text above is kind of random and there’s no obvious, overarching theme for the year that I can see. I’d love to tie it all together with a pointed, philosophical soundbite, but I don’t think that’s what 2016 was. It was a year where I felt like I got my feet back under me after a couple years of very little sleep and a year where I started to have a little more free time because I wasn’t going to bed at 8pm just to survive. It was a good year and as always, I look forward to an even better 2017.