Last night just before 3am all three of us woke up to the house shaking. It was bad enough that it even woke up Elijah (“Mommy! Daddy! What’s happening?!”), but it wasn’t bad enough to shake anything off the walls or make it difficult to move. Tyla got Elijah back to sleep pretty quickly and after walking around the house to look for any damage, I hopped online to see how bad it was. As I sat down there was a smaller aftershock.

Within a few minutes, the quake information was available on the USGS website and I had a notification in my inbox. If you’re not familiar with that site and you live in an earthquake zone, I recommend you spend some time there. Here’s the page for the main quake last night which was a 4.6 and both it and the 3.5 aftershock were between Lake Stevens and Monroe (less than a 30 minute drive from my house). They were 25-30km deep and lasted 10-15 seconds.

Not only does that site get very quick assessment of the intensity of the quake but you can also fill out a quick survey to help them assess the potential damage. Strangely it looks like their notification service page is broken right now, but when it’s working, you can set your own alert levels. So for example, I get an email alert whenever anything bigger than 2 hits the Pacific Northwest and anything bigger than 5 hits the west coast. Check back on the site later and look for the Earthquake Notification Service.

So that site gave me some instant calm as I realized it was a pretty mild earthquake and then Twitter helped some as I didn’t see any reports of damage or injuries. After about 45 minutes, the TV stations finally started picking it up. Kiro 7 had a story about how the newscaster’s teenage son was up watching TV and he said their cat sensed it before it happened…

We haven’t found any damage around here and none of us are hurt. So after the gallons of adrenaline that instantly flooded our system finally wore off, we were able to go back to sleep. 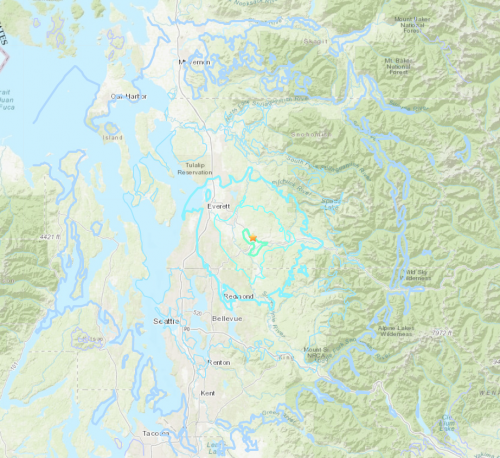