The last two Christmases, I’ve built Elijah toys from the Wood Magazine construction series. 2015 was the front end loader and 2016 was the dump truck. He plays with them a lot so I decided to go for it again. A few months ago, I showed him all the toys and asked which ones he liked. Of course his favorite was probably the biggest build: a tractor with a dump trailer and a lowboy trailer. I supposed I could have just done a single trailer, but eh, why not go for it all?

If you’ve been following my woodworking Instagram account (@martenswoodshop), then you know this project has taken me quite a while. It kicked off on November 1 and I finished it almost exactly one month later. The instructions were pretty good although there are two fairly big flaws with the plans:

Luckily for me, those flaws (at least in my book) are part of the entire series so I knew to keep my eye open for them going into the project. The whole thing went pretty smoothly without any major disasters. I felt like it went a little faster than previous projects because this time I got a whole bunch of boards milled to all the various thicknesses that I needed before I started building.

The dump trailer added a new twist since it incorporated PVC. It was a little tricky getting the wood glued to the PVC without too much glue squeeze out, but hopefully it worked well and will stay together.

These toys feel more fragile than the previous ones I’ve built, but I guess it anything breaks, it’s not like I can’t repair it. I figure I’ll do a pass on all of the toys after he gets older and is ready to put them on a shelf or in a box (in which case I’d probably put them on MY shelf.)

Obviously, please don’t say anything about this to Elijah. He’ll be unwrapping these for Christmas, but I’m so excited to have them done that I had to show you! 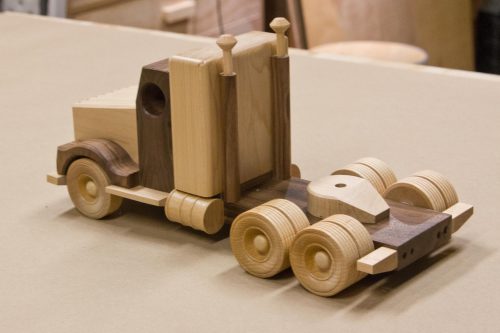 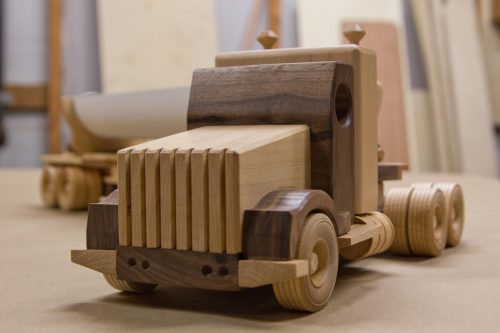 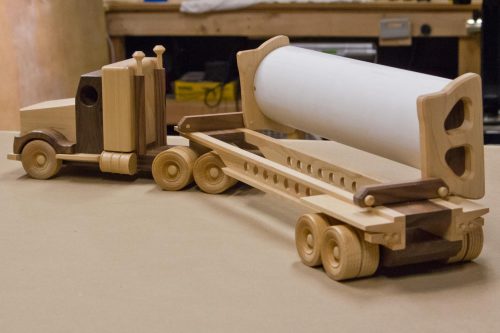 One thought on “Wooden Semi Lowboy and Dump Trailers”