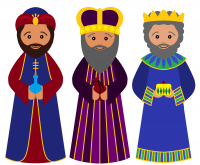 For as l can remember, I’ve thought that it was silly to have the three wise men in the nativity scenes. They didn’t show up until Jesus was at least a few months (maybe a year or two) old. So I sat down to do a blog post explaining how we know this and… NOPE. I was wrong.

Ok, well we can’t technically say for sure exactly when they arrived, but most of the evidence does indicate that they probably arrived the day (or a couple days) after Jesus was born. This site has a great explanation of how we know this and what a possible timeline looks like. I ran it by Pastor Herrmann and he gave it the thumbs up.

So where did I get this notion in my head that Jesus was quite a bit older? The Bible says that King Herod ordered all of the babies under two years old killed to try and wipe out what he perceived as a threat to his throne. Why would he do this if he knew that Jesus’s birth was very recent? We don’t know. Herod was an angry, mean guy so maybe he could have just been covering all his bases. Or maybe he expanded the time range to make sure that his guards got the message and didn’t have to try and figure out how many days old a Baby looked. Or maybe he wanted to send a message to the population that he was the man in charge. We don’t know and it doesn’t really matter.

I guess the nativities still are incorrect. The shepherds and the wise men probably weren’t there at the same time, but I’ll let that slide.

In fact, none of this really matters or changes the story. The important part is that on that night in Bethlehem, the Almighty God came to earth in the form of a baby and started on the journey to the cross. Because of our faith in his life, death and resurrection, we’ll get to meet him in heaven and ask him all these questions!