I apologize in advance for those who didn’t attend Peace Lutheran Church in Granger, IN in the 80s and 90s. You’ll probably just want to skip this post. Even if I explained it all you’d probably just say, “Meh.” Then again… maybe you say that after all my posts?

On Sunday, July 26, Tyla and I headed over to Bremerton for church. It’s a 90 minute drive if you head around the south end of the sound and skip the ferries so it’s quite a hike for a church service, but this one was special. Chris Hintz was getting installed at Christ the King as their new principal! Pastor and Mrs. Hintz were there too and Pastor even gave the sermon.

It was so much fun to catch up with them again after all these years! I haven’t seen them all since Chris and Nikki’s wedding in the summer of 2005 down in Arizona. After spending so many days together growing up, our lives took us in opposite directions.

It’s pretty crazy to think that our tiny little grade school now has three alumni (Chris, Ken and me) who graduated within five years of each other living out in the Pacific Northwest! Hopefully we’ll all be able to get together soon.

But the craziness doesn’t end there… the Christ the King church building is the same design as Peace in Granger! It’s not brick for brick the same, but it’s probably 80-90% similar. There’s no mistaking that the two buildings came from the same set of plans. Pastor Hintz said that the WELS had a set of three designs that they were recommending for new buildings around that time and this was the biggest of the three. It was so weird to be sitting in church in Washington with the Hintz family watching Pastor Hintz give a sermon!

Chris and I played together for three years on the Michigan Lutheran High School baseball team. We’ll be playing against each other in a few weeks at the area church softball tournament. I tried to snag him for our team but his own church wisely scooped him up first. I hope that we get to play against each other! It would be awesome to be on the same field as him again.

So welcome to the Pacific Northwest Chris, Nikki and family. We’re excited to have you out here and looking forward to getting together with you soon. 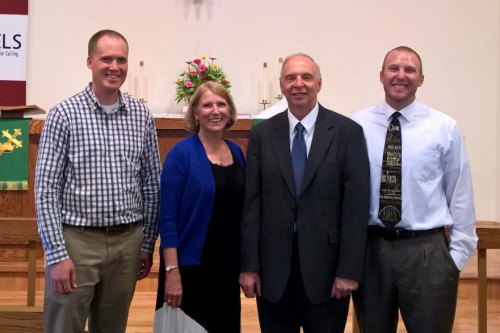