Don took on a big project this summer and replaced his fence. I took some boards that were in reasonably good shape thinking I would make something out them. They sat in the garage for a while before I decided to glue them up into a panel. I trimmed off the rotten ends. Then I put them on my hold down jig and ran them through the table saw to trim off 1/4″ on one side. Once I had that nice straight edge, I could flip them over and run them against the fence to trim off 1/4″ on the other side. With those nice clean edges, I was able to put glue on them and clamp them together.

So then I had a big panel… and I still didn’t know what to do with it. I finally decided to cut out the shape of Washington state. I messed around with blowing up a picture and trying to print it out on a tiled series of paper sheets but gave up and just printed an 8.5×11. Then I drew a grid over the picture, drew a bigger grid in chalk on the panel and I drew the shape by hand.

I was going to use my shiny new bandsaw to cut out the shape, but once I realized how dirty all those boards were, I decided I didn’t really want to dull my brand new blade. So I did it with my little handheld jigsaw instead. I did use the bandsaw to trim a 1×4″ sheet of plywood to put on the back of the panel just to give it some extra strength in case those edge glue ups don’t hold over time.

It was a fun project because I didn’t know what I was going to end up with and I’m going to give it to Don and Nancy as a gift. 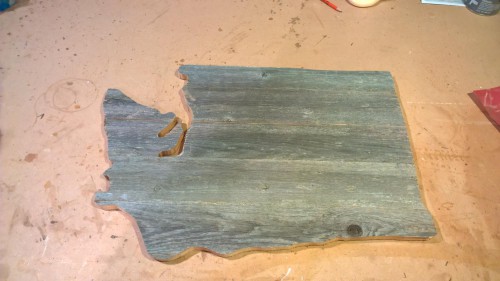