For about the last ten years, I’ve saved bottle caps from most of the beers that I’ve opened. I have… a lot of them. I always knew there would be a project with them at some point, but what? I like the idea of covering a coffee table, but I don’t really want a coffee table in the man cave. And I like the idea of doing a big mosaic but I don’t think I have enough of each color to do anything very impressive. Then I got the idea to do a map. There are lots of cool bottle cap maps around, so this isn’t anything original, but I made the state of Washington with bottle caps. The wood is just simple 1×4 pine and I covered it with some stain that I then sanded down to look a little distressed. This was a very Pinterest-y project.

Along the way, I thought about doing the United States and having bottle caps on the map from where the brewery was located, and I thought about doing something similar for Washington, but in the end, the placement was mostly random. There are a couple bottle caps specifically placed where the brewery is located but I’ll let you find those Easter Eggs on your own if you want to. 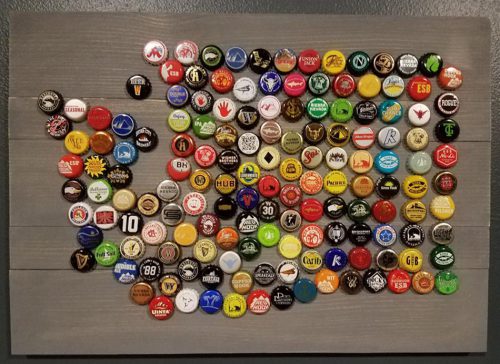