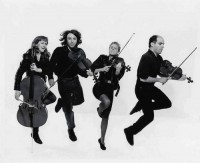 The DJ at our wedding introduced us to a group called “Vitamin String Quartet”. As the name implies, they are a string quartet. They play covers of popular music. That was the music he used during the dinner. If you aren’t paying attention, it just sounds like classical music, but every once in a while it catches your ear and you realize what song they are playing.

Check out their music on your favorite streaming service, but one of my favorites is their Jason Mraz album. I also noticed that they have a “Geek Wedding” album which is a bunch of love songs from geeky movies like Lord of the Rings. Tyla is lucky we got married before that album was released.