For my birthday, Tyla bought me a Bixler 2 which was a nice step up from the foam board airplanes I had been building before. I’ve had a ton of fun with that and only one bad crash (but it was flight ready again in less than 15 minutes.)

For Christmas, she bought me another step up in difficulty: the UMX F4U Corsair BNF with AS3X from E-flit. That’s a mouthful, but as you might have guessed, it’s an F4. And it’s TINY. The wingspan is less than 16″! The “AS3X” part of the name is a little on-board computer that helps keep the tiny plane from feeling too touchy. The net effect is that it flies like a much bigger plane as the computer seamlessly counteracts the effects of wind.

This plane is small but it’s still a bit too fast to fly in our cul-de-sac. It’s a great one for a soccer field though and the schools down the street provide lots of flying opportunities for it.

The tiny plane doesn’t skimp on the details. I took my own pictures but these photos from the marketing site are much better. Want to fly it sometime? I’d be happy to buddy box with you! 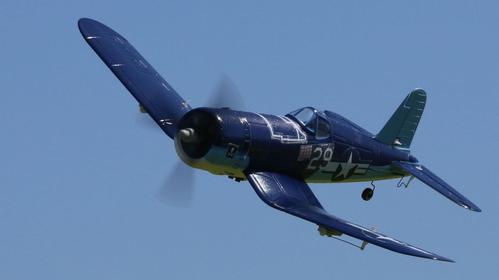