We had two small cherry trees along our very short driveway. The blossoms looked beautiful in the spring but the trees were ugly the rest of the year. They were pruned very oddly and were starting to die off. The one closer to the house had a crazy root structure with a number of very large roots partially above the surface. It was time for them to go before they died more and started dropping branches.

Logan was kind enough to help me out with the whole process. We made quick work of them with a chainsaw and manual branch cutters. As we cut them up, I was amazed at how many of the branches were totally dead. Taking it down was a good decision. We each took a load of the branches to Pacific Topsoil and we were done with that part.

Then there were the stumps. Oh yeah. When I was planning this project, I figured we would just dig them out and maybe use the truck to help pull them out. A little digging revealed that would be a huge project and i was also nervous about the water, gas, communication and irrigation lines that run up that strip of property. Brute force didn’t seem like a good approach so we rented a stump grinder instead.

The first stump was very quick but the second one took us about two and a half hours because of the big network of large roots near the surface. We made a mountain of wood chips but we got it all done. Now I just have to feed those chips into my yard waste bin over the next week or two if I can’t find a use for them.

This fall we will be planting at least one new tree in that spot and then next spring I think we’ll make some planter boxes to start a small garden. It will be tiny compared to our neighbors beautiful garden, but it will still be delicious.

Logan, thanks for helping so much with this project! 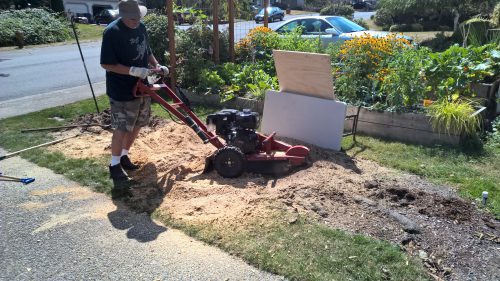