I’ve had a lot of projects go really well lately, but there’s one that has continued to haunt me and I’m officially tossing the idea. I give up.

Tyla found some motorized Thomas the Tank Engine trains for Elijah. They aren’t the size of the standard wood tracks, but they do make plastic tracks. I thought it would be fun to make my own tracks because then we could have whatever pieces we wanted and it could exactly fit on his play table.

The first few attempts involved etching the wood repeatedly to burn in the tracks. I tried multiple times and finally got the interlocking knobs to fit properly, the curves to be big enough that the train could make the turn, and the rails to be the right width. The problem was that they were never deep enough to hold the train in place. When you’re etching wood, you can only take so much off at a time before it starts the wood on fire, so these attemps amounted to hours and hours in front of the laser cutter watching it slowly take away material. Here’s one of my best attempts with that method. It was rare for a train to make an entire circuit around the track without falling off and I eventually tossed these in the trash.

I gave up for a couple months and then had the idea that maybe I was approaching the problem backward. Instead of trying a reductive process of burning away material, why not do an additive process? I cut one piece that formed the bottom of the track segment and then the top segment was made of three pieces: the middle and then the two outer edges. The “rails” were left blank on that top piece. So the whole segment was two thicknesses high but the rails were only one thickness high. These were very quick to cut and it didn’t take too long to glue everything together. I thought for sure this would work but… the bottom of the train drags on the middle piece and the wheels can’t get to the bottom of the groove to push the train along. Fail. In the trash it goes. 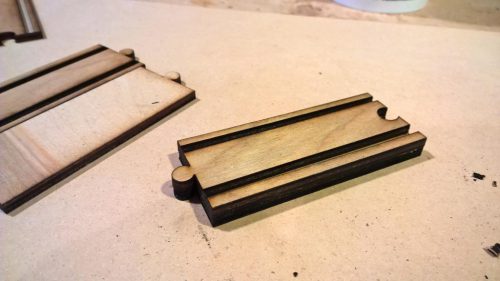 If I spent enough time I could probably figure out the right way to do this, but this project has ceased to be fun and if I decide that I really want Elijah to have tracks, I’ll spend the $26 on Amazon so he can have tracks that actually work.

It wasn’t a complete bust because I learned a lot about the laser cutter and fine tuning designs, but it stinks that I don’t have anything physically complete to show for all that time.