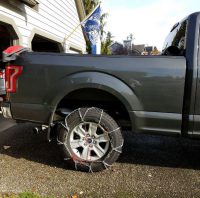 We haven’t had a lot of lowland snow around here in the past few years, but when it does happen, it’s a mess. When I moved out here, I thought people were blowing it way out of proportion, but after my first few Seattle storms, I got it. The roads are usually wet prior to the freezing event and we get a layer of ice underneath whatever snow comes down. Add into that tons of hills, drivers that may have never even seen snow before and very few snow removal vehicles and the city basically shuts down. If you want a quick overview of what it looks like when you combine ice, snow and Seattle, check out this YouTube link. Chains are very helpful for navigating the hills when the roads get like this.

On top of that, if you’re going to travel in the mountains in the winter, it’s a good idea to carry chains. There are times when the roads get bad and chains are required on most vehicles. There are even situations where the roads are really bad (but still open) and chains are required on ALL vehicles, including 4WD and AWD. The WSDOT has a good page about this. If you get caught without chains when you should have had them on, expect a very big fine ($500+).

So blah blah blah, I buy chains for all my vehicles. I used them a few times on the Subaru and they were incredibly helpful. The manual for our Escape specifically says not to install chains. I’m guessing it messes with the AWD system. (The Subaru AWD could handle it for short distances.) For the Escape, we got AutoSocks which are approved by the WSDOT. They aren’t as good or durable as chains, but they are effective.

The truck manual actually says that only certain tire sizes should use chains and my tires weren’t listed. Too bad, I’m buying chains for it anyway. On the rare instances where I need them, I’m not using an AutoSock for a big truck. I bought both the Subaru and the truck chains from tirechain.com. The specific ones I’ve purchased are “Class S ONORM Diamond Chains”. The chains come quickly, are priced competitively, and they’re easy to install once you get the hang of it. They slide around the back of the tire and then once you attach them to the tire, you drive forward a few feet and retighten them. I highly recommend that you practice a couple times in your driveway because the first attempt might take you 15-30 minutes. After you understand it, you can put them on in 5 minutes.

The chains come with a nice carrying/storage bag, but I like to put one of the chains inside a ziplock bag so that they don’t get tangled up. I also put a ziplock back in there with a set of dispoable heavy latex gloves and the instructions.You’re probably going to be putting these on in messy road conditions.

The first five years that I spent out here were a lot snowier than the last five years, but who knows what’s going to come. I want to be prepared for a mess on the commute home and I also want to take my truck into the mountains in a safe manner. If the price is prohibitive for you, it’s possible to buy cable chains at a local Les Schwab and then return them at the end of the year if you didn’t use them.