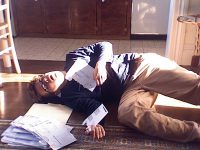 Tyla and I are done with our taxes for 2016. This was our 11th year getting our taxes done by the same tax pro. I realized that I’ve never blogged about her so I figured I’d give her a plug this year.

We use H&R Block. I always feel inclined to defend that because we all know that many of the people at these tax preparation employees are not trained much better than you or I would be if we had a tax application on our computer. The very first year I moved here, I had a very complicated return so I decided to give H&R Block a try. Hearing that it was going to be complex, they scheduled me with their “best tax professional.” I would later find out that her name is Kelly Hall and she has not only been doing this for more than 25 years, but she also does a lot of the training in this part of the country.

Each year she happily plows through my mountain of paperwork in a one hour appointment. Along the way, she provides me with a wealth of suggestions of ways to save more money next year and tells me which kinds of records to keep to claim various deductions. Many of the years she even catches errors in the tax forms that I receive.

I walk out smiling because it only took one hour and because I’m confident that they were done right. I’m not leaving money on the table. There’s no way to prove this, but I’m sure that a lot of the money I pay in preparation fees is recovered by the additional ways she finds to save me money.

I also walk out thinking, “She made that look so easy. I should just use this as a model and do it myself next year.” And then inevitably there is some new complexity in my finances and I’m thankful to know that Kelly can take care of it for me.

The cost of tax preparation varies widely depending on the complexity of your taxes. Ours are fairly complex and we end up paying around $340. I have great respect for the many of you that I know do your own taxes. I’ve done my own before too and it makes me stress out too much for fear that I’m doing it wrong or missing large amounts of deductions. I’ve learned that paying the tax preparation bill is less painful than doing it myself. If your ratio works the other way then kudos to you!

If you want to try H&R Block for the first time, let me know. I have a referral coupon that will get us both some money.

P.S. Ok, since we’re talking about federal taxes, I also can’t resist urging you to make sure you understand how much money you actually paid in taxes. I’m not talking about the money the government might be returning to you, but the actual money that was withheld and kept by the government. If you know what you paid, at least you’ll be making more of an educated choice the next time you make a vote related to taxes. I would wager that 90% of our population has no idea how much they pay in income taxes.