Mark Rober has another great video. This time it’s about the science behind carnival games. I’ve seen videos like this before but he does an especially good job. I appreciated how he broke down the games into categories based on their feasibility and collected data about win percentages, cost of the prizes, etc.

Flite Test started out as an remote control airplane channel, but they have expanded to include some full scale airplane content as well. Recently, Josh got to take a flight with aerobatic pilot Sean Tucker. When I was growing up, I had two pictures with autographs hanging on my wall. One was from all 6 Thunderbird pilots and the other was from Sean Tucker. He shares some interesting thoughts in addition to amazing flying in this video.

Frank Howarth is a wizard with the lathe and recently he learned how to carve perfect circles. He immediately took it to the extreme and created a wooden eyeball. 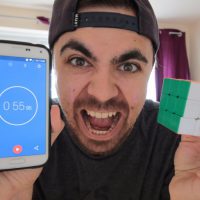 One of my favorite new channels on YouTube (where “new” means “I just learned about it) is Learn Quick With Mike Boyd. Mike is a Scottish YouTuber who picks a skill and videos his attempts to learn it. And when I say he learns it, I mean that he works incessantly on the new skill until he hits an impressive milestone. For example, how about riding a wheelie for 50 meters or doing a 5x5x5 Rubik’s Cube in under 10 minutes? I’m plowing through the entire catalog of his YouTube channel.

It’s infectious. Think of all the skills you’ve been impressed by but have never taken the time to learn. The really amazing part of his channel is that it generally only takes me five or six hours to pick up these incredible skills! He goes from zero to impressive in the time it takes to watch a couple movies. I think we’ve all wasted five or six hours in the last month, or maybe even the last week. I can’t help but feel motivated when I watch this stuff.

One of my new favorite YouTube channels is from Mike Boyd. He picks an interesting skill and goes all-in until he figures it out. His recent video about stacking dice is a great example:

Destin traveled with his kids to see a US world record domino fall. If you like this video, check out the other behind-the-scenes video that he mentions.

Peter Brown is a magician when it comes to epoxy. In this latest one, he experiments with adding fluorescing pigment to the epoxy. The video starts a big abruptly but just stick with it. The end result is really neat.

Destin Sandlin has one of the best YouTube channels in existence: Smarter Every Day. I don’t know how he keeps upping his game, but he has managed to do it again. He found his way onto the perfect tiny little patch of earth where he could watch the eclipse AND see the International Space Station transit across the sun during the eclipse. The math is bonkers. He got a bit lucky because they periodically adjust the height of the space station (it slowly falls to earth) and the last adjustment put the viewing location on some reservation land that is very difficult to get to. It all worked out and he has a great video about it. He wins the eclipse.

It’s been a while since I’ve done a Best Of YouTube post, but, as usual, a lot of great content has been flowing into my eyeballs. First up this time is from the Flite Test guys. They are doing some full scale flight content in addition to their normal RC content. They went to Oshkosh for the big airshow and posted a good wrap-up video. Fun fact: They talk a lot about Sean Tucker in the beginning. He was the only signed photo I had in my room for much of my childhood.

If you pay attention to video shot with your cell phone or most other consumer cameras, you may have noticed a jello effect where straight lines of things moving quickly through the frame aren’t straight. It’s caused by something called “rolling shutter.” Whether you already know about that or not, this video is still incredible. The special effects do a fantastic job at explaining the subject matter.

Modern Rogue is pumping out good content. Some of it is a bit too long for my tastes, but overall, I’m excited when they put out a new video. They’ve had a couple martial arts/self-defense videos. The latest one is about choking someone quickly. While you’d need to practice to get good at it, it’s not super complicated and it seems pretty easy to remember.