For a long time, Tyla has wanted to rent a house on a lake to spend time playing with Oskar (and oh yeah, the rest of the family too.) We booked it early this year. Unfortunately we had to put Oskar down before we made it to the cabin, but the vacation must go on!

So Tyla, Elijah, and I headed to Lake Cavanaugh with Tyla’s family. Booking it in mid-September, we really didn’t know what kind of weather we were going to have. We were very blessed to have 80 degree sunshine the whole weekend! It was perfect for swimming and boating in the provided canoe and kayak.

The house was a VRBO rental and it could easily have handled twice as many people. Elijah loved playing foosball, ping pong, air hockey and pool. The house was great!

I had never heard of the lake before this, but I was really impressed. It’s only about 1.5 hours from our house (northeast of Arlington, WA) and even though it’s close, it feels very secluded. The lake water is VERY clean and the lake is big enough to easily support a lot of people skiing and tubing. The only downside is that the lots are very narrow so the houses and docks are really crammed together.

We made a lot of great memories that weekend. It also happened to be my birthday so this was a pretty great way to spend a birthday. I hope we’ll be able to visit the lake again! 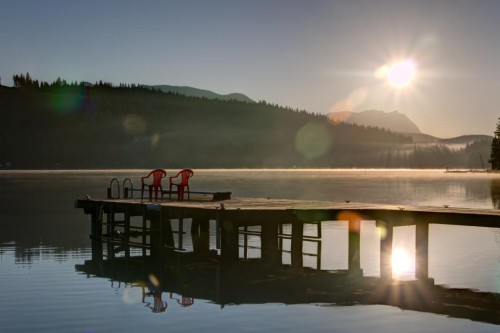 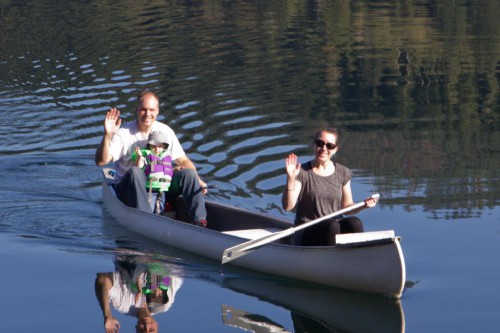 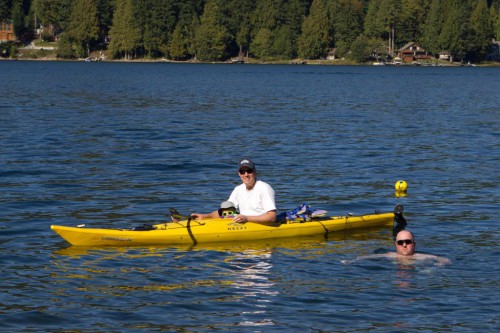 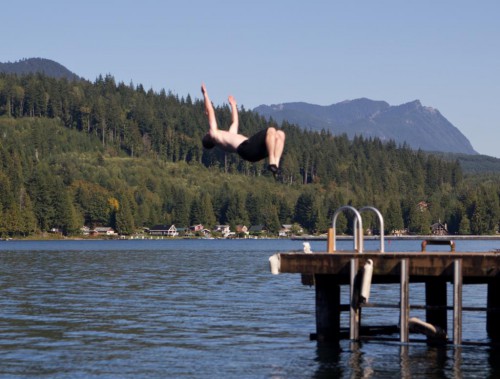 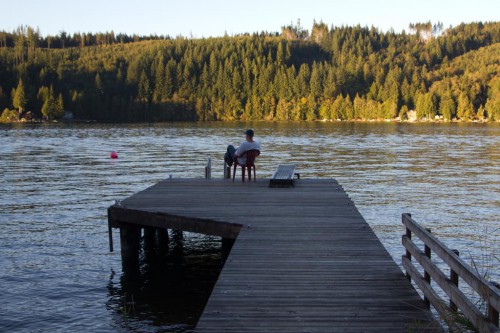 Ever since Elijah was born, Tyla has had her eye on a specific resort down in San Diego called Loews Coronado Bay. This year, we decided to make that trip a reality. This was the first time any of us had been to San Diego. It was also our first major trip with Elijah that didn’t end at a relative’s house.

Tuesday
The trip down was pretty simple with a 2 hour and 20 minute direct flight. We bought Elijah his own seat even though he technically could have flown on our laps. It was nice having our own row and since it was a quick flight, it wasn’t too much money. He did pretty well on the flight despite only taking a 30 minute nap.

It was nice having a quick flight in the same time zone because we didn’t have to get up early and we arrived with plenty of time to set up in the hotel and then go to dinner. Dinner the first night was at Nicky Rottens in Coronado. We were actually looking for Coronado Brewing Company but found this place instead. We got there in time for happy hour, enjoyed some beverages, and had some delicious food. 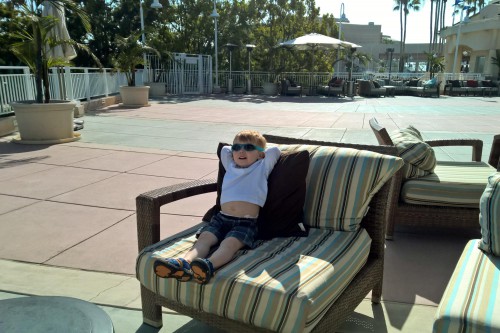 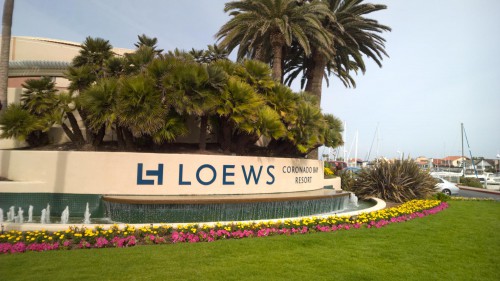 Wednesday
We were a little bummed to see that the weather was not what we had hoped when we originally booked it. The forecast said it would never get above 70 and it would probably rain at least part of the time. Wednesday was forecasted to be the nicest day so we decided to head for the beach. The resorts sits on a very long strip of land that separates the Pacific Ocean from Coronado Bay. It’s basically a sand bar with an island at one end. A quick golf cart ride (which Elijah loved!) from the valet took us over to the state park beach. It was pretty deserted because of the cooler weather, but Elijah didn’t care because he got to play in the sand. There was also a big grader moving some sand around so we had to go check that out.

After a failed attempt at a nap, we visited the pool area of the resort. It consists of a kids pool, a very large family pool, an adult pool and two hot tubs. Elijah has been taking swim lessons for quite a while so he was very comfortable in the pool. I really enjoyed it becaues it was my first time swimming with him. Tyla had a floaty thing that kept him upright in the water and he was happy to float around by himself, blowing bubbles along the way. Pretty cool for a 23 month old kid!

On Tuesday we had visited Von’s (Safeway) to buy food for breakfast and lunch in the hotel room. We did that each day and then went out for dinner. Wednesday night we headed to Old Town Mexican Cafe. As the name implies, it’s in an old part of San Diego with lots of shops. The food was pretty good and from the way Tyla walked after dinner, the margaritas must have been great. 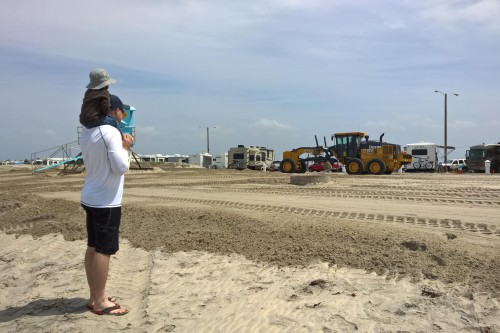 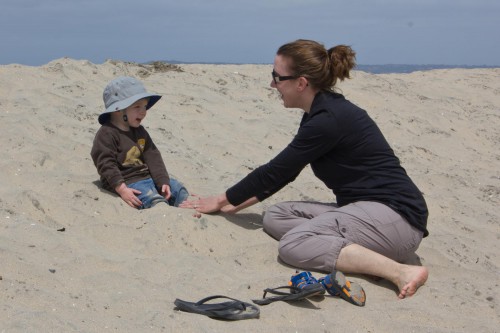 Thursday
We didn’t plan a lot of things to do because traveling with a young kid is unpredictable, but the one thing we did want to do was visit the San Diego Zoo. Today was the day! We got there right as the opened to get as much done as possible before Elijah collapsed from exhaustion. The zoo is HUGE! We started with a double decker bus tour. Elijah loves buses and it was a good way to see a bunch of the park very quickly. If you take the tour, I recommend sitting on the top of the bus on the right side. We were on the top on the left which was ok, but it was a little hard to see most of the exhibits as we went clockwise around the outside of the park for the most part.

On foot we tried to pick the highlights that we could hit before nap time. The pandas were at the top of that list. I didn’t really understand why they were such a big deal, but I learned that there are only 12 of them in the United States! We saw two of them and one was awake and eating. We saw lots of other animals before ending up at the petting zoo and then heading back to the car. Overall Elijah did a good job. He got a little tired of sitting in the stroller and walking the way that WE wanted to go, but for a two year old, you can’t ask much more. He zonked out in the car on the way home and finally got a good nap.

By the time he woke up, some rain had rolled in so we walked around the resort for a while and then headed to dinner. Dinner was down in Chula Vista at Project Pie. It’s a pizza place started by the same guy who started Mod Pizza. More on that in another post but the pizza was good! (There are a lot fancier/better places to eat, but with an antsy two year old, our choices are limited.) 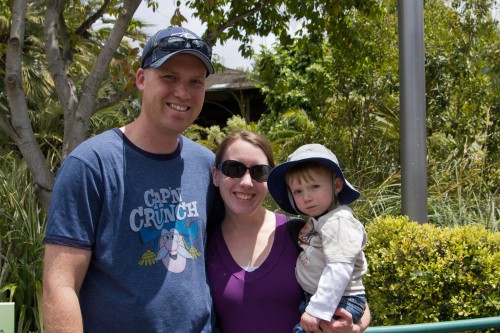 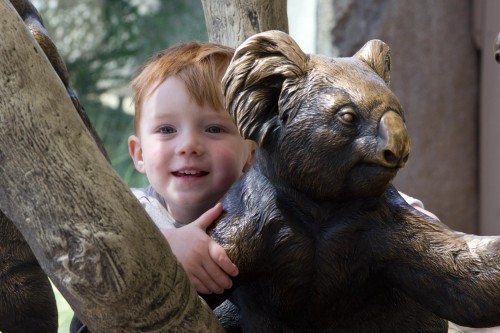 Friday
Rain. What are the odds of visiting San Diego in May and getting rain? Very low. I looked it up. But that didn’t stop the rain. We made the best of it and headed to the USS Midway. Being a huge aircraft carrier, most of the area is inside and it kept us dry. Pro tip: Get there early! We showed up right around the time they opened and had to wait in the ticket line and also wait in line to get into the ship. If you have access to a printer, you can buy your tickets online and save some time.

Tyla wore Elijah in the baby carrier as we explored some of the rooms below decks. It was awesome to see all that living history, but we only scratched the surface since Elijah was along with us. They give you free headsets for an audio tour and the few stops that I listened to were really interesting. Elijah was happy to spend every possible minute in the big hanger right below the flight deck. It was a big space where he could run around and they also had bout 4 cockpits to sit in. For a kid who loves buttons and knobs, this was perfect. While Elijah played, Tyla and I took turns going up to the main flight deck in the rain. They’ve got it loaded down with a bunch of planes from many different decades.

If you had no other obligations, you could easily spend 4-6 hours there. We finished up in about 2. Elijah got a set of wings which he was pretty proud of and then we went back to the hotel.

After lunch and a failed attempt at a nap, we hopped in the car for a ~45 minute drive out to Cabrillo National Monument. It commemorates the first place where Europeans landed in the western US in 1542. There’s a statue and a lighthouse in the park, but I think the big draw is the view. It’s also a good spot to watch whales migrating during specific times of the year Thankfully the rain had cleared out leaving beautiful skies.

Dinner was at the Coronado Brewing Company. This was the place I had been shooting for on Tuesday night. The food was good and the beer was good as well. Nothing stellar but I had no complaints from the six different beers that I sampled. 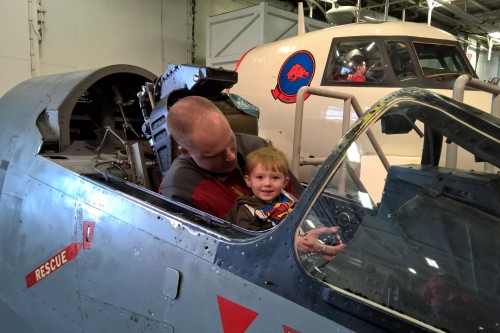 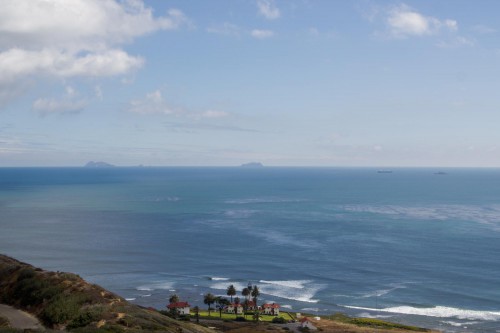 Saturday
We had to leave for the airport around 11 so we spent the morning packing and walking around the hotel. We had hoped to go swimming in the heated pools one last time but it was so windy and cool that even the heated water didn’t seem very inviting.

The flight back went well. Elijah caught about 20 minutes of sleep on the way into the airport but somehow stayed awake for the entire flight. It’s incredible how much sleep he missed on this trip! He did a great job for being so tired though.

Thanks to Don and Nancy for giving us rides to/from the airport! We arrived home to find everything in order and then settled in to try and resume a more normal routine with Elijah.

While the trip wasn’t exactly what we had been dreaming about, it was still relaxing and enjoyable. San Diego is a nice city. Traffic was almost non-existent and it was easy to navigate. I think we’d both be happy to go back again. We want to spend more sunny time on the beach, check out Sea World and LEGOLAND, and probably visit the zoo again. Thanks Tyla for all the research you did leading up to this trip!

You can also view a Photosynth from our balcony and from the national monument. Note that you can click on any of the photos in this post for a larger view. Bonus points if you can figure out which photos were shot with our Canon T2i and which were shot with the our Lumia Icon phones. These phones take really nice photos! 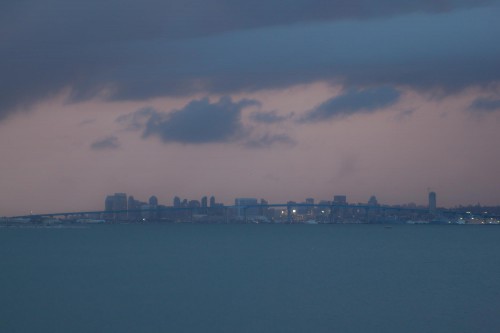