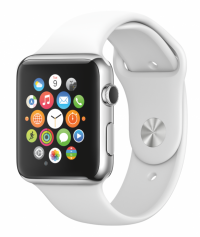 The new Apple Watch launched recently with the usual media frenzy. They sold out almost immediately though it’s anyone’s guess what that actually means in terms of the number of units sold. Personally, I’m a bit uninterested in the whole smart watch thing. Some day we might get there, but the tech is pretty infantile at this point. I haven’t worn a watch since college which was about the time I started carrying a cell phone. At this point, wearing anything on my wrist drives me bonkers and would take quite a while to get used to.

The Apple Watch will be the first time a lot of people have seen a smart watch, but rest assured that there are lots of them on the market that do pretty much exactly the same thing as the Apple product. Apple isn’t really inventing anything here, but they don’t have to invent to make money.

If you really want to dip your toe into the smart watch world, I’d point you to the Pebble. It has been around for a long time, does the core things that you really care about (seeing notifications at a glance), and because of the screen technology, the battery lasts for a week instead of lasting for a day… or less.