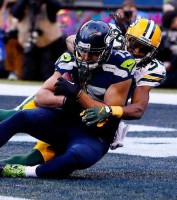 In poker, there is a term called “sucking out on the river.” It means that a player who has almost no chance gets super lucky on the very last card played and comes back to win. Usually that player jumps up in surprise, screams in victory, and then sheepishly turns to the opponent and says “… sorry.” You know you got away with something you didn’t deserve.

That’s what the Seahawks did yesterday against the Packers. Neither side played great, but Seattle was the worse of the two for the first 55 minutes. They had FIVE turnovers and their offense was pathetic. With just under 5 minutes left in the game, they were down by 12 and the only points they scored were from a fake field goal by their special teams. The Seahawks then rattled off some combination of very lucky and very skilled plays that will be remembered for a long time by fans on both sides.

I, and other fans in the house, had come to grips that the Seahawks were going to lose. It stunk but ok, whatever, it’s just sportsball. The painful part was watching them go out in such a horrible way. This wasn’t the team that had gotten to this point in the season. They were down to their last card and they sucked out on the river.

So congratulations Seahawks. Sorry Packer fans. This game was a hot mess all around, but for most of the game, Green Bay was less of a mess. At least there were no bad calls that decided the game this time.

The Seahawks head to Phoenix to face the Patriots. If the Seahawks didn’t get this all out of their system, they are going to get annihilated. They better spend these two weeks taking a hard look at what went wrong and figure out plans both to stop Tom Brady and also to wring some points out of their meh offense. 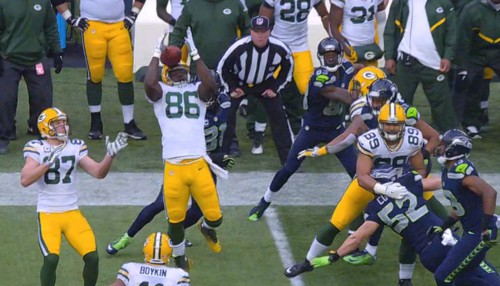