When we booked the stay in the caboose, I looked at a map, noticed it was on water in the south end of Puget Sound and I assumed it was on Hood Canal. Wrong. It turns out that the sound is divided up into a bunch of different “basins” and Hood Canal is just one of them. We were actually staying on the “South Basin”. The Wikipedia article about Puget Sound has a very nice map showing the different basins and I’ve included that map below.

It felt like the difference between high tide and low tide was huge while we were down there in the South Basin, but surely the tide is the same everywhere, right? Nope. Here’s a quote from Wikipedia: “The difference in height between the Higher High Water and the Lower Low Water averages about 8.3 feet (2.5 m) at Port Townsend on Admiralty Inlet, but increases to about 14.4 feet (4.4 m) at Olympia, the southern end of Puget Sound.” It has something to do with all the interconnections and interplay between the basins, but I couldn’t find any good info explaining the physics of it.

The shoreline is over 1300 miles long! That’s roughly the driving distance from New York City to Miami. We’ve explored only a tiny portion of it, but there are lots of great spots for further investigation in the future. 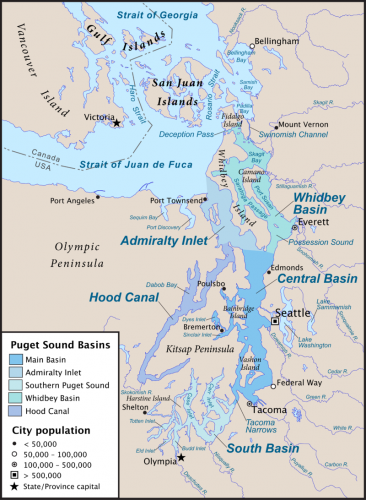