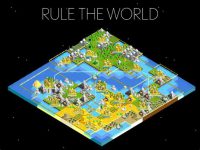 Thanks to NickS for pointing me to The Battle of Polytopia. It’s a turn based strategy game similar to Civilization but MUCH simpler. It’s available for free for both iOS and Android, but there are optional in game purchases if you want to get more tribes and support the author.

You can either play to get the highest score in 30 turns or to conquer every other civilization on the map. After choosing your tribe, you’ll get one person in your tiny little village and then you set off exploring the land, gathering resources to expand your city and investing in technology. Along the way you’ll probably encounter other tribes to battle and conquer.

The game walks the perfect line of complex strategy and easy to understand game mechanics. The technology tree is pretty diverse but it’s simple enough that you can easily memorize it. It’s also the same for every civilization which helps dramatically. The differences between civilizations are their starting technologies and the type of terrain that they normally start on.

A multiplayer feature was recently added so you can play against your friends. It’s fun but it takes a lot longer than playing against the computer.

If you’re at all interested in strategy games, this one is worth a look! It has totally sucked me in. My high score in points mode is 63,730 and in domination mode, I’ve gotten 3 stars with 6 of the tribes so far. Can you beat those marks? (Judging by the high score tables, lots of people can.) If you want to join me in a multiplayer game, send me a note! So far I’ve gotten Logan hooked but the more the merrier.

One thought on “Polytopia”