I wrote last week about why I decided to buy a Grizzly 1023 table saw. The next trick was getting it to my house. Having Grizzly ship it would cost about $240 by the time I was all done. They have two showrooms and one of them happens to be 1.5 hours away in Bellingham. (The other one is in Missouri.) I wanted to check out their building anyway, so I made a plan to go get it.

Unfortunately they are only open on weekdays during normal business hours, but I was able to drive up there on Friday afternoon. I went back and forth on whether I should load it right into the truck and rent some ramps and a dolly to move it down or if I should rent a trailer with a ramp on the back. Both rentals were in the same price range so I went with the trailer because it would be lower to the ground and hopefully easier to unload.

I made good time on the drive up there but as I approached Bellingham, the temperature dropped and the rain started to have some snow in it. I was NOT eager to drag a trailer home in the snow so I hustled through the showroom and filled out the paperwork to pick up the saw. I want to go back some time and take it all in!

After getting loaded up, I wrapped it with some stretch wrap and strapped it down tightly. Thankfully the snow held off and I was able to make it home safely.

Tim and Logan stopped by to help me unload and it turned out that I really only needed one of them. It was relatively easy to just push it off the back and down the ramp. Oh well. The main box ended up being 450 pounds and then there was a second ~100 pound box containing the fence and rails.

In the next post, I’ll cover unboxing and setting it up. 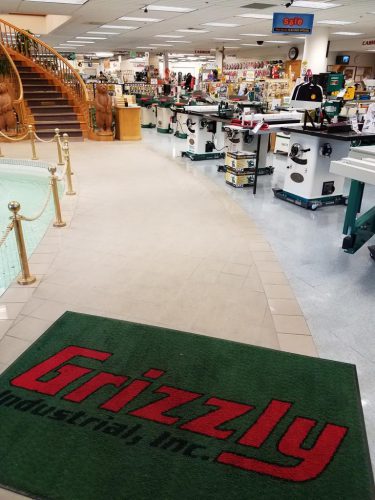 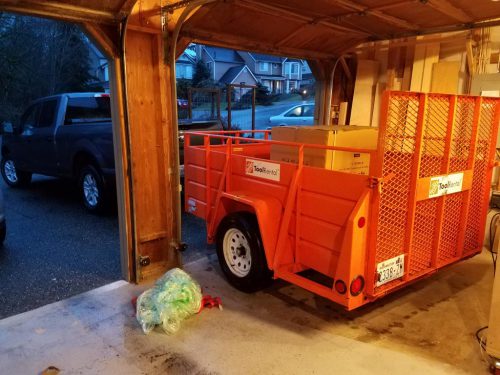