As many of you know from Facebook, Tyla’s mom passed away early Sunday morning and her funeral is today, but I know that many of you cannot attend so here is the obituary that will be in the bulletin. 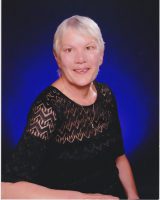 Nancy worked with special needs children at Lincoln Elementary as a teachers’ aide until she moved to Kirkland, Washington in 1991. She was a stay at home Mom until returning to work in 1997. Nancy worked as a preschool teacher at Calvary Lutheran Preschool and Kindergarten in Bellevue, Washington from 1997 to 2003. From 2003 to 2009 she cooked and served lunches in the public school system. In 2010, Nancy began working for Evergreen Speech and Hearing Clinic transporting records as a courier and organizing the archival of patient charts. In 2014, she was diagnosed with stage 4 metastatic breast cancer. Nancy stopped working in 2017 when her declining health prevented her from continuing.

Nancy Brandt is survived by her husband, Don, and their three children, Logan Brandt of Redmond, Washington; Tyla (Ben) Martens of Woodinville, Washington; and Megan Brandt of Kirkland, Washington; as well as her one grandchild, Elijah Martens. She is also mourned by her sister, Gloria Burmester. She was preceded in death by her father and father-in-law.

In lieu of flowers, the family requests that memorials be directed to Calvary Lutheran Church toward the roof replacement project. The church address is 16231 NE 6th St, Bellevue, WA, 98008. Alternatively, gifts can be directed to Evergreen Hospice Care. evergreenhealthfoundation.com/support-hospice

One thought on “Nancy’s Funeral”