As I wrote back in 2016, our house is just big enough and the WiFi band is just crowded enough that we need two access points to get good coverage. Back then I chose to dive into Ubiquiti networking gear. You can kind of think of their stuff as consumer grade equipment with enterprise an level feature set (and learning curve!) I installed some of their stuff at church with great success and it worked ok around here, but I was having to reset it more and more frequently. Plus the router we had was also flaking out periodically. It was either time to beef up my Ubiquiti game or go a simpler route. For once in my life, I chose the easier, less geeky route.

Mesh networking is the hot new(ish) trend. Multiple devices are spread around your house and they work together to service all your wireless clients. They automatically hand clients off to the access point with the best signal. Some of the more popular brands are Orbi, Eero and Google WiFi. I chose… none of those. Instead I went for Synology’s offering largely because a group of people at work were singing their praises and it looked a bit more configurable and was cheaper to expand as needed.

For my main router, I chose the Synology RT2600ac and for the extra access point downstairs, I got a Synology MR2200ac.I think I could have saved a little money by just getting two MR2200’s but I opted for the beefier RT2600ac because I have a lot of wireless and wired clients in my house and I figured the extra horsepower wouldn’t hurt.

The system was pretty simple to configure (though not as straightforward as products like Orbi) and I have been happily roaming around my house for a few weeks without ever dropping my signal. I have great coverage everywhere inside, out in the driveway (useful for checking traffic while I’m sitting in the truck) and out in the cul-de-sac. Oddly the only place I’m having trouble is on the back patio. I’m not sure what the deal is there but I’ll have to either place with the placement of my devices or add a third access point to completely blanket my property.

The interface for the RT2600ac is very impressive. It’s basically a full windowed desktop environment inside your browser. You can enable plugins, get traffic reports emailed to you, and toggle feature switches to your heart’s content. 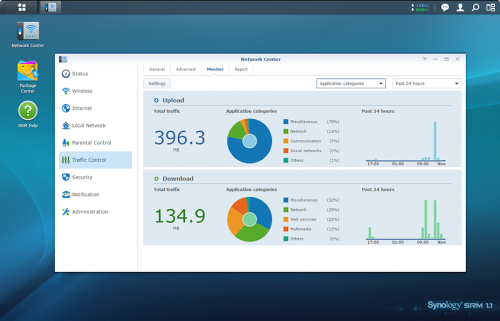 If your existing wireless setup is working well for you, don’t bother changing it, but if you’re in the market for a new system, this Synology gear gets the thumbs up from me so far.