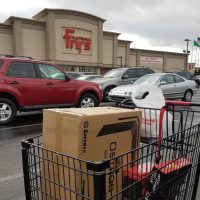 Our home TV set up runs on Windows Media Center. Our cable line comes into a PC and all of the DVR functionality occurs there and gets fed around the house to Xbox360s hooked up to TVs. For the past few weeks, it has started having more and more issues with basic playback. It stutters or pauses for long periods of time and it almost ruined our last football party. That PC is ancient. I bought it in 2006 and it has been running nonstop as our Media Center since 2010. I never touch it and it just works. That’s the way things should be. But given the problems we were having, I had to go take a look.

Pretty much as soon as I touched it, it totally fell apart. I blew the dust out of it and maybe I was too aggressive, or maybe it was just a few reboot cycles that did it in, but the thing won’t even get to the BIOS screen anymore.

Decision time. We’re so close to just cutting cable out completely. We only watch a few TV shows and those are easily purchased on Amazon Video. The small cost of those shows is easily outweighed by the convenience and lack of commercials to skip over. But as I thought more about it, technology isn’t quite ready to fit our needs. Specifically, the NFL is too tight with their content to give me many options. I want to be able to watch live NFL games or record them and start watching them and hour or two after they’ve started. There’s no online offering that I know of in our area which allows this. Our Comcast subscription does have a live streaming TV option that works well, but I can’t record that at all.

What about just getting a Comcast DVR like everyone else? We currently pay $71/month for a package that includes 120Mbps down 10Mbps up internet, very basic HD cable channels and HBO. The Comcast rep said that my package “doesn’t support a DVR”… how is that a thing? Anyway, getting a DVR would mean adding $30-40/month to my package price and then another $10-20/month for a DVR. And then I’d only have a DVR hooked up to one TV. I’d need two if I was going to have them on both TVs. Yuck. That’s never going to happen.

There are a lot of online offerings now like Sling TV, Direct TV Now, and PlayStation Vue. They all look awesome but I don’t see the local channels available in our area and the DVR offerings are spotty at best. We’re getting there but I think it will be a couple more years until my scenario is covered.

So in the end, we decided to build replace the current PC with a new one. I built one out with parts available at Fry’s for $340. That included a case, motherboard, CPU, RAM and a power supply. I already had an SSD for the OS, a hard drive for the recordings, and the cable card tuner to receive the Comcast signal. Here’s my shopping list at Fry’s:

The build only took 30-45 minutes and it booted right up. Then the trouble started. I need to run Windows 7 to use Media Center. The product has been slowly killed off since then and no longer exists in Windows 10. The problem is that the motherboard I picked had the Skylake chipset from Intel and the old Windows 7 install media doesn’t have the right drivers for that. The result is that you can’t use the USB ports on the machine. Umm… how do you install Windows from your USB key or use your USB mouse and keyboard to get through the installer if you can’t use your USB ports? Ugh. I’ll save you the long, painful story, but I ended up moving an old DVD drive over and putting the Windows install disc in there. I was able to get a USB keyboard to work just enough to make it through the installer and then I was able to install the drivers in Windows off of the mother board DVD. (This post was particularly helpful for adding drivers to the WIM files in the installer.)

I’m home free, right? Nope. Microsoft wants everybody on Windows 10 and it’s really obvious if you try to start with a fresh install of Windows 7 SP1. Windows Update won’t work for you. After gobs of trial and error and researching, I found this post which worked for me. It basically involves manually installing two Windows Update packs that update the functionality of Windows Update itself. After that it was just a matter of installing around 200 updates and THEN I was ready to go.

Media Center works great on this machine and even though it was about the cheapest PC I could build (without delving into totally unknown brands) it’s crazy fast. Windows 7 still has that “Windows Experience Index” feature. I ran it for fun and got these scores. Recall that the scale goes from 1.0 to 7.9.

I’ll be putting it through it’s paces over the next couple weeks but I’m hopeful that this will sit quietly in the closet for 3-4 more years until I’m able to fully switch to a more modern solution.

P.S. Did you know you can still get WEI scores in Windows 10? This post has the details but I’ll copy the instructions here.

Open a Run window (Windows Logo key+R), type perfmon and press Enter. Click Data Collector Sets > System > Right-click System Diagnostics > Start. When it has finished, go down to Reports in the left pane > System > System Diagnostics and click on the name of your computer and the data will be collected. Scroll down in the main pane and expand the Hardware Configuration drop down > Expand Desktop Rating drop down > Expand the + sign below Query, finally expand the + sign below Returned Objects to display your WEI score.