Ok, this isn’t just a chunk of meat, so maybe I should have called this “Grill Month” or something. The name needs work. Whatever you call it, we’re still going strong on our streak of only having dinner from the grill.

We like to get pizza from Papa Murphy’s. It’s a “take and bake” place meaning that they make the pizza for you and then you bake it at home. They have grilling instructions and I decided to give it a shot.

The pizza came out really well. I used an aluminum pizza pan with holes in it as the barrier between the grill and the paper tray on the bottom of the Papa Murphy’s pizza. The crust was nice and crispy and there weren’t any burned spots. It tasted pretty much the same as it would from the oven which makes sense because all I did was basically use the gas grill as an oven. We’ve made our own pizzas from scratch and cooked them on the grill before but this worked significantly better.

We aren’t able to cook two pizzas simultaneously in our oven very effectively so maybe this would be a good way to cook the second pizza if we’re trying to get two of them out around the same time. 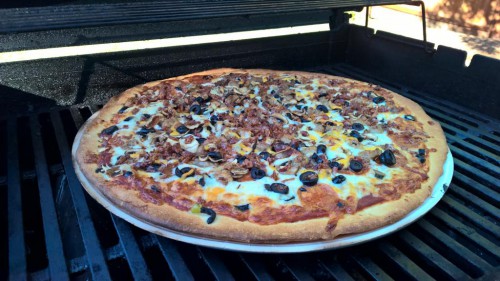