Elijah has been asking for a treehouse for quite a while. Despite my best efforts, I can’t find a good spot to put one in our tiny yard. So much of it is covered with French drains, irrigation lines, etc. But I still wanted to give him something fun to play in and to climb on.

I was putting him to bed one night when I looked up and realized that the vaulted ceiling in his room left a lot of space above his bed. So I chatted it over with Tyla and then build a platform above his bed.

Since this will probably be torn down and thrown away in 6-8 years, I wanted to keep it simple. I used Jay Bates’s bunk bed plans and basically cut out the bottom bunk. The whole thing was designed to fit around his existing bed.

The 2x4s and 2x6s that I got from Home Depot were pretty bad. After a lot of picking, I was able to find some fairly straight boards but they were going to require a lot of sanding. So I had the bright idea of running them all through the planer to skim off a little bit on each side. That worked well but man did it make a huge mess! There’s no way my little shop vac could keep up with that so I just let the chips fly and cleaned up the mess later. 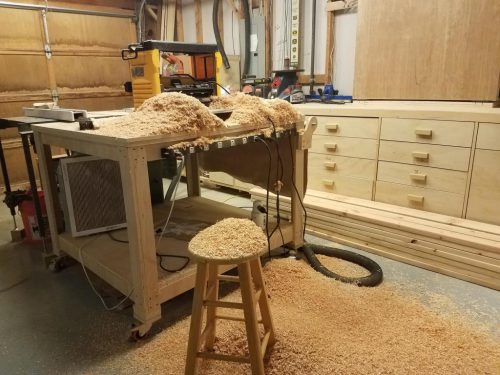 Elijah stayed in the shop for a lot of the build. It was fun to have him helping and seeing how it all went together. 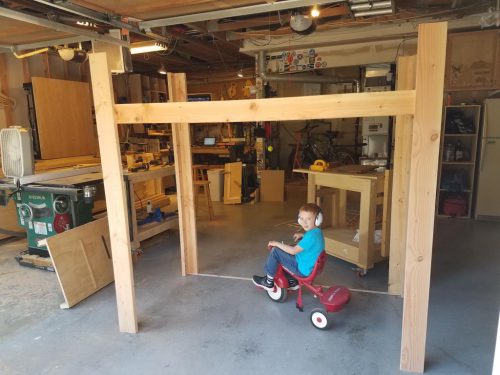 I wasn’t looking forward to painting that beast but I didn’t want to leave it looking like dimensional knotty lumber so I finally pulled the trigger (pun intended) on an HVLP paint sprayer. I chose a fairly simple one from Rockler but it still has a detached turbine unit. I originally thought I’d move the loft into the back yard to paint it but the forecast was calling for rain. So I tried setting up our pop up kitchen tent thing in the driveway with tarps underneath and on the sides. That wasn’t terrible but the loft was too big to be able to spray comfortably. I did the primer but them moved it back inside to do the paint by hand. I’m looking forward to trying the spray again on something smaller. The photo below shows the setup before I added the final two walls of plastic. The side of the loft facing down did not need to be painted as it was going to end up against the wall in his room. 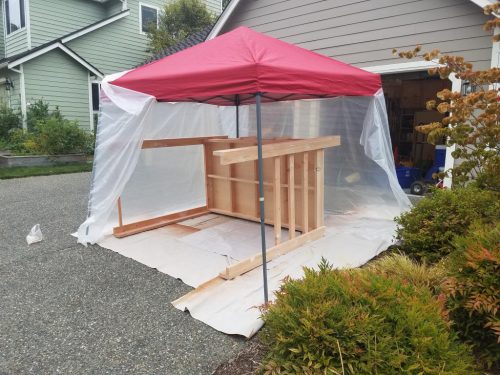 This loft is starting out very simple but I’d love to build a little house up there at some point. We’ll see how much he uses it. His favorite part right now is the bar I added on the bottom for him to swing from. I think we will definitely need some pillows or a pad up on the top. It’s hard on our knees! 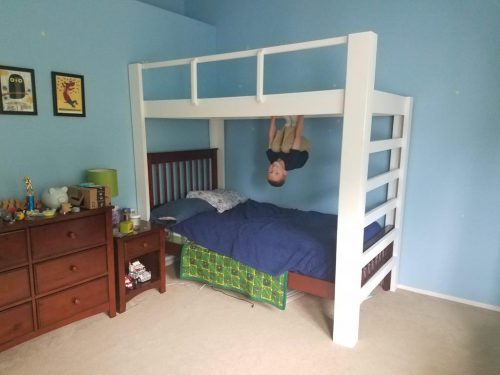