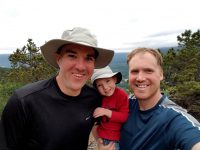 On Saturday, Logan, Elijah and I headed up Little Mt. Si. Tyla messed up her ankle a bit and decided to stay home. We got to the trailhead at 9am and there was already no parking. Thankfully someone pulled out right as we pulled in.

It’s too much hike for Elijah to do all on his own so I packed him about 3/4 of the way up and then he walked about 2/3 of the way down. He’s technically still under the weight limit for the carrier we have but wow, that’s a load. It’s funny though that carrying him doesn’t seem as heavy as when I used to load a couple water jugs in my pack to train. I think it’s because I always knew I could stop and pour out the jugs.

It was my first time on the hike and I enjoyed it. The trail was packed since it was a nice day and there is still snow on a lot of the higher elevation trails. We were on our way down before the big rush came, but we had plenty of company at the top of the mountain. The view, unsurprisingly, isn’t as great as it is from the top of Mt. Si, but it was still nothing to scoff at.

Thanks to Logan for suggesting a hike and picking it out! Hopefully there are a lot more hikes coming up this summer.