That computer science problem has been on my list for a long time, but finally I realized that I shouldn’t block the whole project on getting around to writing that code. It took a lot of searching, but I finally found a good, free online tool: Wolfie’s Puzzle Generator.

The next step was to pick a picture. A good picture has a lot of visual interest so you don’t have huge areas of “blue sky” pieces. I wanted to make this as a Christmas gift for Mom so I also wanted something that meant something to her. I settled on a picture of the Seattle waterfront that I’m pretty sure I took while they were out here visiting. I cropped it down to get rid of most of the boring blue sky.

I printed off a 16×20 version of that at Costco and then used 3M spray adhesive to attach it to a thick art board from the craft store. By the way, at 240dpi, this image was almost exactly 20″ wide with no scaling. The picture looks gorgeously sharp. It’s incredible how good modern digital cameras are!

Then it was off to the laser cutter. I spent a long time messing around with various tapes trying to find one that would help protect the surface from burning but also would peel off easily after being cut. I never succeeded. Maybe my adhesive wasn’t strong enough, but for some reason the tape would always pull off with the picture instead of leaving the picture stuck to the art board.

I settled on doing three light passes to slowly cut through with minimal burning. You can still see some burning around the cuts but the picture hides a lot of it. I wanted to make a 1000 piece puzzle but I only squeezed 260 in there due to the dimensions of the pictures and not wanting to make microscopic puzzle pieces. These were 0.75″ square so they were already pretty small.

I don’t expect this puzzle to hold up to a lot of beating but hopefully it will at least work once! If you want to see a video about this, David Picciuto has a making a laser cutter puzzle. 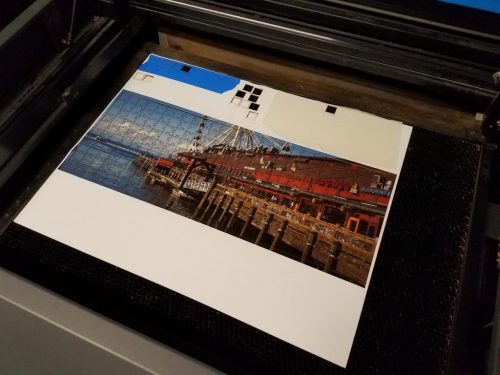