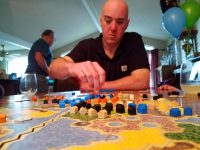 Logan got Kingdom Builder for Christmas and a few days later I discovered it was available on my phone. I’ve been playing it since then. A lot.

Whenever we head to Wil Wheaton’s Table Top Games videos on YouTube to see a video of them playing it. They have an episode for Kingdom Builder and it’s a good way to understand what the game is about. It’s a deep strategy game with very simple rules. There’s some luck based on what type of resource you draw each turn, but the game is mostly skill.

I couldn’t find a nice strategy guide for the game so I thought I’d make an attempt. I’m by no means an expert, but I’ve played through a few hundred matches so I figure I can at least get one started.

This is one of my favorite board games. You can explain the rules to a new player in a couple minutes but it will take a lifetime to master it.