I’ve been thinking about building an internet enabled scale for years now, and recently, I finally got around to building it. Sure, there are plenty of WiFi scales these days, but I wanted one that automatically took a measurement every few seconds and uploaded it to the internet where a website would display a continuously updating chart. I suppose a product like that exists, but I thought it would be more fun to make it myself.

The electrical components came from SparkFun. They make an OpenScale board that did almost everything I needed when connected to a load cell. The board was already programmed to have all the features I needed for calibration and taring the scale. Originally I had planned to hook that up to a WiFi-enabled Arduino or Raspberry Pi, but I kept it simple and just plugged it into my computer. The computer ran a simple program that I wrote to communicate with the board and get a reading every 30 seconds. Those readings were uploaded to a SQL database in Azure and then I wrote a website that used the Google Chart Library to display the measurements.

There are a lot of technical terms in that last paragraph, but it was mostly just plugging together a bunch of components to make the solution and I had it finished in a couple nights (after a lot of research to find all the components!) I mounted the load scale on a piece of plywood and connected a bowl to the top of the load cell. Voila!

The scale made its debut at work to celebrate my 12th anniversary at the company. You can see the live website at http://candyscale.azurewebsites.net/ It will always show the data from the last time I had the system set up and running. I’m hoping to try it again at Halloween. 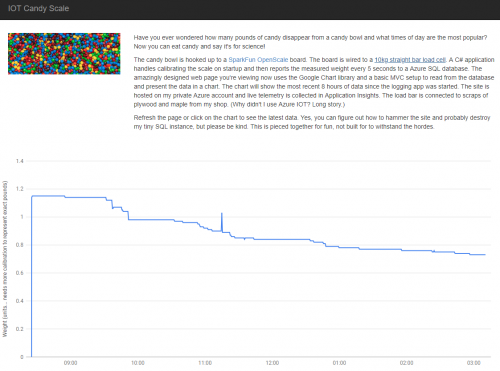