As I mentioned in the previous post, Grandma Martens passed away on Easter. I was very thankful to be able to make a quick trip back to Illinois for the funeral. It was a very memorable trip!

Buying last minute tickets means that you get to pay top dollar for the privilege of scrounging through what everyone else has left behind. My flight left at 6am on Friday morning and I was back by 10pm the next day. I flew out of the new Paine Field passenger terminal. I have never seen a terminal that looks anything like that place. It was so fancy! But aside from the luxurious surroundings, it was very nice flying out of such a small airport. Parking is easy and TSA agents outnumbered the passengers in line by about 10 to 1. Assuming the price was right, I’d definitely consider flying out of there again. 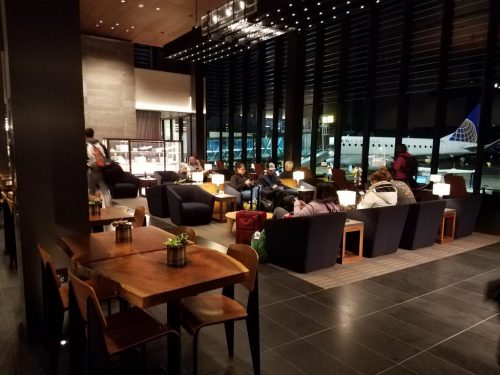 I was able to get a cheaper flight on United with their “Basic Economy” fare. The main differences were that I couldn’t choose my seats ahead of time and I was only allowed a small carry on that would fit under the seat (or a checked bag.) I took it as a challenge and did the whole trip with only a backpack! That was a little tricky since I wanted to bring a suit but I flew out there in my suit and hung up the jacket during the flights and it all worked out very well.

My flight connected through Denver and then went straight to Moline, IL. Both were small planes but having a seat assigned at the last minute worked out fairly well. I got an exit row one time and on the flight back I had an empty seat next to me on both legs of the journey.

With all the flights and layovers, I was very thankful for two tech gadgets:

Once I landed in Moline, I was met by Mom and we headed straight over to the visitation. We had some time as a family before the doors opened and wow, once they opened it seemed like there was a line out the door for two hours! The final tally was well over 200 people in addition who stopped by. All four children were their with their spouses chatting with all of the visitors while the cousins milled around in the back catching up. Obviously it would be nice to catch up with everyone under different circumstances, but it was still nice to see everyone and since we were all confident that Grandma was in heaven because she believed that Jesus paid for her sins, the mood was not super somber.

After the visitation, the family split up and I was in the group that went out to a Mexican restaurant for dinner and I finally ended up back at Uncle Dean and Aunt Sandy’s. A huge thanks goes to them for letting Dad, Mom and I stay there in addition to both of their kids’ families! It was a full house but I slept very well after such a long day.

Saturday morning we headed over to Zion Lutheran Church in Taylor Ridge, IL. The weather was giving us all it had that morning with 30-40 mph wind, heavy rain and temps around 40 degrees. The forecast not too far away in Iowa was calling for 3-6 inches of snow! 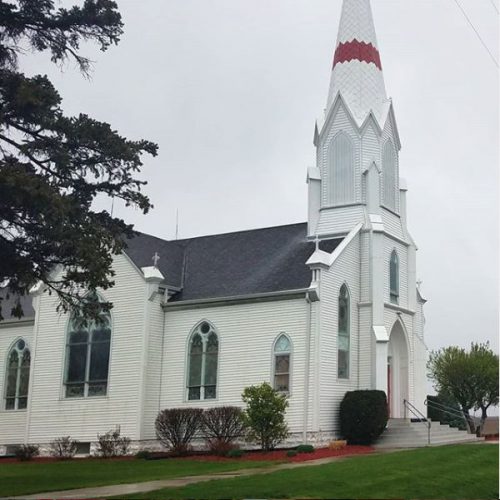 Grandma had left lots of ideas for her funeral service and she picked some great topics and hymns, praising God for sending Jesus to save us and encouraging all of us to stay strong in our faith and join her in heaven.

I was a pallbearer along with some of the other cousins. We braced ourselves against the weather and carried he casket out to the hearse, followed it across the street to the cemetery and then brought it into the tent. As we made that trip, the church bell tolled once for every year of Grandma’s 93 years on earth. That tent looked like it was going to blow away but it held up for the graveside ceremony and managed to dump a bunch of water down Uncle Mark’s back not once, but twice. 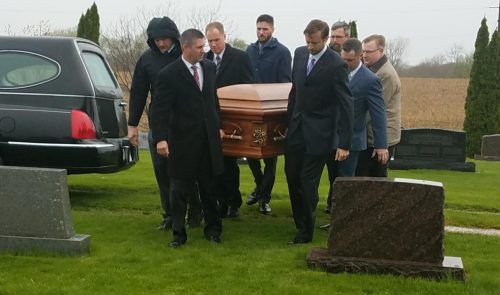 We made our way back over to the fellowship hall/gymnasium for a luncheon put on by the church. Thanks to all of the families who brought food and put the lunch together!

Everything about the morning felt like it was out of a movie, except that while there was sadness, the overwhelming emotion was one of joy and hope. We’re thankful that Grandma was so active up until that last month, and it’s extremely comforting that she shared her faith every time we talked to her. There’s no doubt that she was welcomed into heaven with open arms because Jesus had saved her from her sins.

From the church, Mom took me back to the airport and I had an extremely wild ride up to cruising altitude for the flight back to Everett. I was very thankful to be connecting through Denver instead of Chicago because over 600 flights were canceled in Chicago that afternoon because of the snow. Our little plane got bucked around very strongly by the winds and hail but we made it out.

I was in Illinois for a little over 24 hours, but there were a lot of memories crammed into that small time frame. Thanks to everyone who made it happen including Tyla for staying home with Elijah and Mom and Dad for giving me rides while I was there. I’m so thankful I could attend! While I hope we have another reunion at some point, it’s hard to imagine ever collecting that much of our big family in one place at the same time.