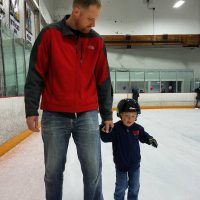 We have a year-round indoor ice rink less than a mile from our house. Elijah and Tyla have killed quite a few hours during the day sitting in the stands and watching random hockey games and watching the Zamboni do laps.

This year, we figured he was finally big enough to fit into some skates and give it a shot. I was pretty sure he could do it, but this trip also meant that I had to dig ice skates out of a box for Tyla and me.

I’ll cut to the chase… we were able to come straight home without stopping at the hospital on the way. So that means it was a victory!

Kidding aside, Elijah did great. I figured we’d get about 5 minutes in and he’d be done, but he stuck with it for about 1.5 hours, never taking a break. I think he probably did about seven total laps, but by the end he was getting more bold. He did have a walker to push around, but he also liked to skate holding my hand.

Tyla and I would take turns doing laps by ourselves. I hadn’t skated for probably about 6 years and before that it was college, but I was surprised at how well it came back. I’m not at the same level I was way back when, but I was a lot closer than I thought I’d be.

Elijah was all smiles the whole time, and he’s already asking when we can go back and try it again.