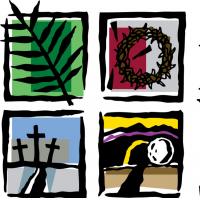 Continuing in the “What do all those church holidays mean?” series, we’re now in Holy Week. It’s a big week for Christians. It started last Sunday with Palm Sunday. This is the day when Jesus rode into Jerusalem on a donkey and was greeted by lots of people waving palm branches to celebrate his arrival. He knew full well what was going to happen to him later in the week, but he came anyway. The people were celebrating him as their king and Jesus cried because they still didn’t get it. He wasn’t their eathly king. He was there to save them from their sins for eternity! Some of those same people would be in the crowd later in the week shouting for him to be crucified.

Four days later, we celebrate Maundy Thursday. On this day, Jesus ate the “Last Supper” with his disciples. You’ve probably seen the famous painting depicting this scene. At this meal, Jesus gave us the sacrament of communion. We still partake in communion regularly throughout the church year. We receive his body and blood along with the bread and the wine to give us forgiveness and strengthen our faith.

The next day is Good Friday. This church service is usually very somber. This is the day we remember Jesus’s death on the cross. He was abandoned by his disciples and the crowds that he had preached to were now shouting “Crucify him!” He was executed in one of the most gruesome manners that humankind has ever developed, and it all happened because you and I sinned. The Bible says that the wages of sin is death, so God sent his only Son to die in our place to pay for our sins.

Thankfully, that’s not the end of the story. On Easter Sunday, various people went to the tomb and found that he was not there. He had risen! His death marks his victory over death and the devil. Because He died and rose again, we can live with Him forever in heaven.

It’s an incredible roller coaster of emotions for the Christian, but it’s a fantastic annual reminder about how seriously God takes sin. God demands perfection and even one single sin is enough to send someone to hell for eternity. We’re all hopeless, but Jesus took our place, bore the weight of the entire world’s sin and died for us. But because he was not only true God but also true man, he had the power to rise from the dead. God demands perfection but he also showed us mercy by sending Jesus to pay for our sins. Nothing we can do can ever pay that price, but if we believe that Jesus died for us, we will spend eternity with Him in heaven.

One thought on “Holy Week”