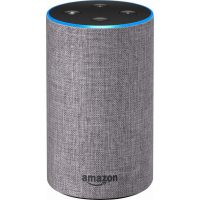 We’ve had an Amazon Echo in our house for a couple months now. I’ve resisted these types of devices for a long time because of the privacy implications. What changed? Basically I gave up. Privacy feels like a hopeless game because I’m not willing to live the hermit life required to have a chance at privacy. And aside from the “the sky is falling” reasons, maybe I trust these bigger companies a bit because if they’re going to put so much of their business into a product, imagine what would happen if there was a big privacy snafu. That’s probably naive.

My bar for electronics is “If it broke, how much would I want to replace it?” So far the Echo is pretty low on that list. I probably wouldn’t replace it, but I don’t mind having it around. The two main reasons I got it were to be a source of entertainment for Elijah and to play music from our Spotify account.

Elijah does enjoy it quite a bit. There’s an app called Amazon Story Time that reads free ~5 minute stories to him. He loves audio books and he gobbles up these stories. That’s a big hit.

The Spotify integration, on the other hand, is disappointing. While I can easily tell it to play one of the playlists on our account, the fatal flaw is that the Spotify Connect protocol only grabs the first 100 songs from the playlist. We have some very nice (long) playlists that blow past the 100 song limit. 100 song sounds like a lot until you listen to it for a few days. Fail. I blame Spotify more than Amazon for that one, but the end result is the same. The workaround is connecting to the Echo via Bluetooth and playing from my phone but that’s not nearly as convenient and I have other devices that can do that.

Spottily was giving away free Google Home Minis to members with a family plan account so I snagged one of those too. It has been sitting in a box for a few weeks. I haven’t even unpacked it. I’ll probably do that at some point but I figure my results are going to be similar but with a lower quality speaker.

For our use case, the Echo feels more like a party trick than a useful home appliance. I’d rate it a solid “Meh”.