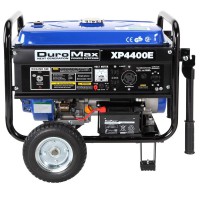 We lose power at our house once or twice a year. In the last nine years, there have been a couple multi-day outages, but in general, our power is pretty reliable. But… we bought a generator. When we came back from vacation to a house with no power, food going bad in the fridge and an overtired kid who was thrown even more out of his routine, I snapped and clicked BUY IT NOW on Amazon.

Generators can get really expensive. I think I kept it fairly simple by making some compromises. I didn’t get a name brand, I didn’t get a super quiet model, I got gas instead of diesel, and I didn’t get one that is wired into my house. What I DID get is a DuroMax XP440E. It’s rated for a sustained 3500 watts, has an electric starter and it cost less than $400. I figure that if we use it even a few times, I’ll feel like it was worth the money.

My main goal during an outage would be to run the fridge along with some lights and cell phone chargers. That will be easily accomplished by placing the generator on the back patio and running extension cords into the house. Simple, but effective.

At some point I want to have a bunch of upgrades done on my electrical panel (per circuit usage monitoring, whole-house surge protection, etc) and at that point I might have them wire in a transfer switch. Then I could just plug the generator right into the panel and (carefully) power the whole house. Obviously we wouldn’t fire up the dryer, the microwave, etc, but it would be really nice to use light switches. Plus, our water heater requires electricity because it’s tankless so this would give us hot water. Brent, our HVAC guy, said we could power our furnace with the generator too. So there are lots of possibilities but I don’t plan to go down that route soon (or maybe ever.) In an emergency, I’m pretty sure I could hack up a solution to get the furnace powered by the generator so I feel like I’m covered. Plus it rarely gets THAT cold here.

Once it arrived, setup was simple. There are a few steps to follow to get it ready to run the first time, but now it should start up very easily via either the electric starter or the pull cord. We live less than a mile from the gas station so assuming they have generators, we should be able to get gas from them as needed if my small local cache runs out.

That all being said, I feel somewhat ridiculous for buying a generator. I grew up in a house that seemed to lose power all the time and we never had a generator. This was definitely a luxury purchase, but for I’m happy with getting this backup plan for only $400.