One big reason why I waited for a 2016 F150 instead of getting a 2015 was because the 2016s were going to come with the new Sync 3 system. Sync 3 includes options for Android Auto and Apple Car Play. I’ll be focusing on Android Auto because that’s what I use.

My truck came from the factory with Sync 3, and while that was an upgrade to the original Sync, what I really wanted was Android Auto and I didn’t have that version of the firmware. Late last year, a firmware update for Sync 3 which adds Android Auto and Apple Car Play leaked online. I saw hundreds of people reporting success installing it themselves, but I was a little nervous to brick an expensive piece of my truck. So I waited. And waited. And waited.

This week I finally saw the update appear on the Ford Sync website. I quickly downloaded it onto a USB key and headed out to my truck. The install took 20-30 minutes, but when it was done, I had Android Auto! It’s pretty slick. You can easily switch back and forth between Ford Sync or Android Auto. Maybe I should pause to explain what Android Auto is…

The common problem with fancy head units in vehicles is that by the time you buy one, it already feels obsolete. And in 10 years? It’s almost a joke how far technology has progressed leaving your fancy head unit in the dust. But we carry around phones in our pockets that get upgraded every few years, have internet connections, and have way more capabilities than head units. So why don’t we just use the head unit as a dumb display and use the phone as the brains of the head unit? That’s exactly what Android Auto does. When you connect, an app starts up on your phone and is displayed on the head unit. It’s a simplified interface with bigger buttons and a reduced set of capabilities for safety. But even with those restrictions, it’s AWESOME!

For example, I can touch the voice button on my steering wheel and talk to Google to send text messages, ask the internet a question, etc. I can pull up the maps and say “Find the nearest Dairy Queen”. A list shows up on the screen, I pick one, and it finds the route with the least traffic. My podcast app integrates with the system as does Spotify. It’s super slick and very snappy. If you want to see it in action, I’ve included a couple photos below but you can also head to YouTube and find lots of demo videos.

My only complaint at this point is that you have to plug in your phone to use Android Auto. They technically do support Bluetooth connections, but I don’t know if that’s just coming later or if it requires slightly different hardware. It’s not the end of the world because I often plug my phone in while I’m in the car anyway.

The best part is knowing that this interface will keep getting updated and improved, my maps will always be up to date, and I don’t have to pay any silly subscription fees to get live traffic on the maps in my vehicle! 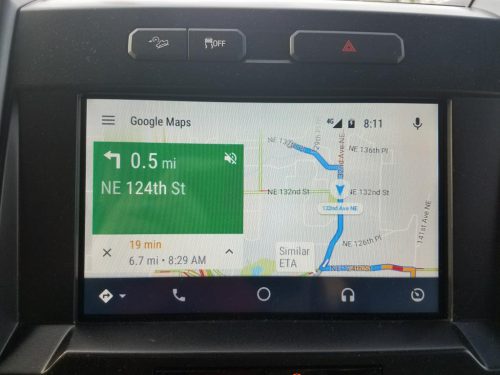 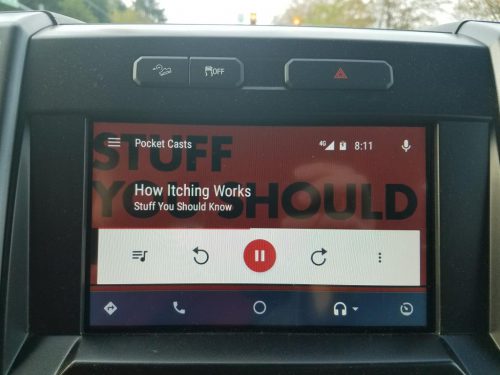