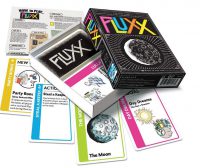 When we get together with Tyla’s family, we like to play board games and we’re regularly trying out new ones. I figured I would start sharing my thoughts about them as we try them. It’s probably silly because there are much better board game review sites out there, but this is the only one that contains my opinions.

The most recent game we played is Fluxx 5.0. The game is extremely simple. The rules are that you draw one card and play one card. At the beginning, there isn’t even a defined way to win! The catch is that many of the cards you play modify the rules of the game. Maybe you’ll play three cards at a time, or maybe the first card you play will be picked by someone else, or maybe you can’t keep any cards in your hand after your turn is done.

Eventually someone will play a “goal” card. That lists out two items that you need to collect to win the game. You collect items by playing “keeper” cards that have various items on them. If you play the two keeper cards that match the goal card, you win. But inevitably, as soon as you get close to winning, someone will replace the goal card with a different one and then you have to start over.

The game is fun for it’s simplicity and maddening for its ability to foil any plan you try to make. I’ve only played three games of this, but I don’t see a strong strategy component yet. There’s probably some strategy in there somewhere, but for now it’s just hilarious to watch the game progress.

One thought on “Fluxx Review”