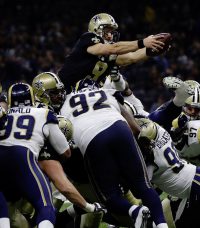 The Seahawks game sure ended dramatically but they were lucky it was even that close. Dropped touchdown passes, multiple missed throws by Wilson, numerous penalties, and a pick six interception put them in a big hole that they couldn’t dig out of. Next week isn’t going to be any easier as they face the seemingly unstoppable Rams who usually give the Seahawks trouble even when the roles were reversed.

In our league, Logan finally put a decisive end to Tyler’s winning streak. But menwhile, Andy has quietly been getting his own five game winning streak going and he’s alone out front. Nick is the next one to get a crack at taking him down. Tim and Nick both had 0’s in their roster but it looks like most of them were late scratches. Nick ended up winning that one with a great last minute defense signing.

The power rankings are relatively stable this week.