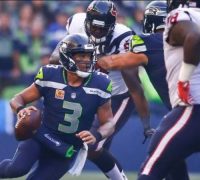 If you take away Russell Wilson’s 30 yards of rushing, the Seahawks had 3 yards of rushing on 17 attempts. The defense allowed 544 yards of offense and gave up 38 points. Wilson also had an interception. And yet, somehow the Seahawks still got the win. The offense had some great long plays and the three picks by the defense helped as well. That game was the definition of a shootout and it was fun to see them win a nerve wracking game, but the game left me with a lot of “uh oh” feelings. A lot of stuff went wrong. Hopefully it can be corrected. Seattle has a good schedule for the next few weeks so we’ll see what they can do against some weaker/average teams.

It was painful watching the Seahawks game and knowing that while I picked up Deshaun Watson, I had him on my bench. He outscored my starting QB by 33 points, but I still picked up the win. In a much more important game, Luke defeated Dad and now has sole possession of first place. Looking at total points scored this season, Luke and Logan are far ahead of the pack. Dad, Austin and I are kind of the next clump. That’s 5 teams and there are only five spots so we’ll see how it shakes out. The other three guys could still make a run for it as well. We have six games left until the playoff roster is set. Next week’s primetime matchup is Luke (#1) vs Logan (#2).