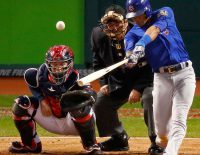 Before we get into football, I have to say something unbelievable: for the first time since 1945, the Cubs are playing a game that could win them the World Series! After being down 3 games to 1, they have fought their way back to even. Last night, they won 9-3 which is the score that they lost game 7 by in ’45. I’m not a superstitious man, but I’m thinking about stopping at the butcher on the way home to grill some fresh goat. Go Cubs go! End this curse!

The Seahawks had another frustrating day. The highlights of the game for me were the big goal line stands. The Tanner McEvoy play was good too but the penalties in the game were killer. So. Many. Penalties. The weak offensive line is hurting the team pretty bad. It’s hard to throw down the field when Wilson doesn’t have time and they get extra penalties as they try to get the first step in the blocks. The final drive down the field looked great but didn’t end in anything. Bleh. After 7 games, they have only won 4. Hopefully Kam Chancelor and Michael Bennett come back soon and Wilson gets healed up. Otherwise this season isn’t heading very far into the playoffs.

In our league, three of the four games were upsets according to the Yahoo projections (those projects are oh so accurate and useful, aren’t they?) The biggest upset was definitely Jim getting his second win against Logan who had the top spot in the league. #8 topples #1. Andy is now top dog in the league and he’s only made 2 roster moves! He has also had the easiest schedule so far so well see if he can keep it up.

We’re over halfway to the playoffs in our league but the league still feels pretty tight. Nobody has clinched yet but another win or two for Andy might get him a spot. Everyone still has a chance I think.

There were some big moves in our power rankings this week: