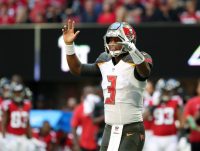 Both the Seattle offense and defense had their act together on Sunday, despite some painful penalties, but then again, the Radiers can make a lot of teams look good. I had fun watching Marshawn Lynch’s ineffectiveness. Sports radio around here was gushing over how great he is and maybe that’s true, but I thought his last year here was a mess. It appeared to me that he just didn’t want to play and I have no respect for that even though I liked him a lot before that. I ended up throwing away my Lynch shirt (ok, actually I donated it.) I have similar feelings about Earl Thomas. Thanks for all you did. Don’t let the door hit you on the way out and don’t expect me to cheer for you when you play against the Seahawks.

Tyler continued his dominating streak with a close win over me. To add insult to injury, he did that with one player scoring negative points. Logan is nipping right on his heels. Andy and Tim round out the top four while the rest of us are tied with 2-4 records. Looking at points for/against gets interesting around this point of the season. Logan and Tyler have the most points by a pretty wide margin. Nick and I have the most points scored against us but Nick also has the least points scored which is a tough combination.

On to the weekly power rankings:

Lots of new records this week…