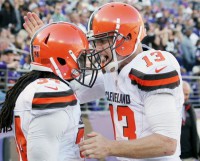 The Seahawks. Bleh. I hope they finish above 0.500. The first half looked ok but then things fell apart in the second half and ended with four consecutive punts. I just don’t see how they can plan around their non-existing offensive line for an entire game.

Our league got a little more spread out but we still have four teams tied at 2-3. Luke continues to look for his first win, but take heart Luke. You’re not the lowest average score and your average score is almost exactly the same as Dad’s and he is 3-2. Luke also has had the second toughest schedule to this point. I think the game of the week was Andy and Tim. Going into Monday night, Tim had a reasonable chance of winning his match with less than 70 points!

There are a ton of high profile injuries floating around right now so please make sure you’re checking your rosters. I won’t call deadbeat on anyone yet but there have been a few situations that surprised me that a player was started despite the reports. I’ve got the league checker robot running again to send out notifications on Thursday and Saturday mornings. You’ll get notified if you have anybody in a worse than Probable state. Every year total points end up deciding the final spot in the playoffs so every game counts!

The power rankings have shifted a bit. Austin dropped out and Jim jumped onto the list. I’m still inexplicably on a good run that I expect to end any week. Jamaal Charles is out now so maybe that’s the start of the end for me.