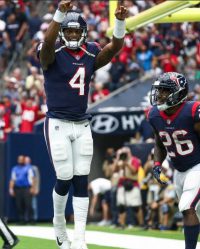 Seahawks! Now THAT was a fun game to watch. I liked the up tempo pacing of their offense (even if it does screw up my 30-second skip button between plays). The downside is that it means that their defense might not get a huge rest on drives that are duds. That did turn out to be the case in the first half so I was worried that we’d see another second half defensive breakdown, but that obviously didn’t happen as the offense set a franchise record for most second half points. The injury to Chris Carson was a big blow though. He looked like their featured back for the first four games but now they have to continue the search. Hopefully Procise and Rawls can get healthy and get moving downfield.

Logan’s domination of our league continued this week as I failed to even make him nervous. Dad and Luke are tied for second place and the rest of us are lagging behind them. Tim is still searching for his first win. Could he do it against undefeated Logan?

The Yahoo draft day projections had Logan in 6th and Dad in 8th which is a great data point to show how ineffective those rankings really are. Of course MY power ranking formula is my more valuable and accurate. We have four weeks in the books so it produces some results now:

A couple important notes for our league: