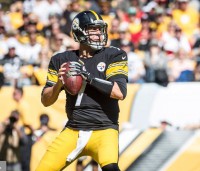 0-2. It’s a rough start to a Seahawks team that has one of the toughest schedules in the league. (For examples, they face more teams coming off bye weeks than anyone else and have fewer opponents on a multi-game road trip than anyone else.) Was Kam the reason? No. Fine him. Dump him. Or better yet, find some way to make him holdout past the point later in the season when he loses his pension and any benefit he had from being in the players union. Penalties were a big killer in the game. As Cris Collinsworth pointed out 572 times during the game, Aaron Rodgers invented the free play and the Seahawks gave him plenty of opportunities to show it off. We’ll see what happens with the home opener, but though the Seahawks haven’t looked terrible, they’re not hitting the ground running.

In our league, the winners from last week continued their winning except for Tim. There are still three people tied at the top (Logan, Austin and me.) Luke, Jim and Andy are still looking for their first wins.

Now on to the weekly awards. I’ll put the new season records in bold.