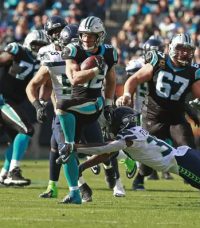 I hope you got a chance to catch the Seahawks at the Panthers. What a game! One lowlight was Wilson missing another pass to an open Doug Baldwin in the endzone. It sailed right over his head just like last week. What happened to the chemistry those two used to have? On the other side of the ball, Christian McCaffrey was making the Seahawks look silly. He finished with 125 yards rushing, 112 receiving yards and 2 touchdowns! It’s not often that a running back has the most points in all of fantasy football for the week. The fourth quarter had plenty of drama including a missed field goal by the Panthers with less than two minutes less and a game winning drive and field goal by the Seahawks. As Pete Carroll said before the game, this was a playoff game. It really put the Seahawks into a great spot to make the playoffs and I think they have have a great chance at topping my 8-8 prediction since 3 of their remaining games are against teams with 2 wins. Hopefully nothing silly happens there.

Our league wasn’t devoid of drama either.Logan topped 170 points for the fourth week in a row securing a spot in the playoffs. Andy also secured his spot even though he lost. But the most amazing game was easily the one between Tyler and Nick. Nick entered Monday night with a 60% chance of winning with Deandre Hopkins only needing about 10 points to put Nick on top. With 10 minutes left in the game, Nick was 0.01 behind. That’s not a typo. The closest game in the history of our league was 0.12 back in 2012. Surely he’d get at least one more yard, right? Nope! The game ended with Nick down by 0.01. With a score that close, it’s not really over yet. Stat corrections come in by Thursday and though it’s unlikely, if a correction hits either team, it could easily change the outcome of that matchup which would have big playoff implications. A win for Nick gives him a real shot at the playoffs while a loss makes it almost impossible. (And in case you’re curious, it is possible to tie in the regular season in our league.)

Next week, Tyler and I do battle with the winner clinching the third playoff spot, although realistically we’re both in. Even if Nick wins the remaining two games and one of us loses both games, we’d still beat Nick in a points tie breaker.

Thank you all for keeping your rosters full even if you’re not going to make the playoffs! It helps keep the league fair if we’re all filling the rosters each week.

Whew. I need some oxygen. Let’s look at the power rankings:

UPDATE: Logan noted I had incorrectly listed Tyler as the owner of Christian McCaffrey.

One thought on “Fantasy Football – Week 12”