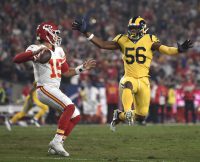 The Seahawks looked pretty good against the Packers but you have to wonder what’s going on with Wilson this season. He’s missed a lot more throws than I remember him missing in the past. I counted at least three big misses on that Thursday game including one to a wide open Baldwin in the endzone.

The real game of the week was Monday Night Football between the Chiefs and the Rams. If you didn’t catch that, go watch a highlight reel. I zoomed past Luke for the win floating on Mahome’s 6 TD’s (despite his 3 INT’s and 2 lost fumbles.) Logan said that Mahomes was “Farving all over the field.”

Our league set another record this season for total score. Logan topped 170 for a whopping third week in a row. I don’t have the stats for it, but I bet that 520.91 points in three games is a league record. Logan and Andy both one to extend their leads on the rest of the league. Yahoo doesn’t give them the little icon yet but they’re pretty much a lock for the playoffs. Tyler and I are tied for third but we could easily get overtaken by Nick and maybe even the others. In fact, Tyler and Nick are playing next week which will be a key game for both of them.

Logan is still on top of the power rankings this week: