I’ve had a couple laser cutter project posts recently, but the real reason I learned how to use it is because Tyla wanted a family sign. She found some on Etsy that she liked but we didn’t like the prices. My first thought was to cut them out on the bandsaw but I quickly realized that would take forever and I wasn’t sure I could cut out the smaller letters.

The laser cutter made quick work of the letters and then it was just a matter of painting them and painting the backing board. It has been really cold and wet around here but I managed to get it all done and assembled.

The dimensions on the sign came out as planned, but it feels pretty big now that it’s in place. It’s growing on me though. The nice thing is that this was made out of scrap wood with only a few hours of work. Most of the time was just doing the painting and letting that dry.

You can’t see it in the photo below, but the letters are made out of 1/8″ wood so they are raised up from the backing board. It’s a nice 3D effect and gives really crisp lines. 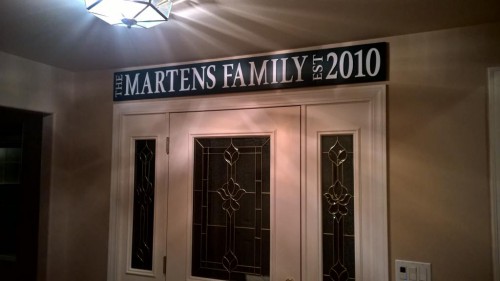