My truck came with big “FX4” stickers on the panels behind the rear tires. They signify that my truck is four wheel drive and has the offroad package. They don’t look bad, but I really like the look of a clean truck, so I set about removing them.

I had some experience with this type of thing before. When we bought the Escape, Ford of Kirkland put their stupid little star decal on the back. That really frustrated me and was actually one of the reasons I didn’t even call them when I was looking for somebody to sell me a truck. Don’t put your stupid $0.50 advertising sticker on my big purchase! Anyway, the first thing I did when I brought it home was use a hair dryer to heat up that sticker and then I carefully removed it. A little Goo Gone cleaned up the remaining residue.

So having that knowledge in hand and knowing that lots of other people have successfully removed the decals from their trucks, I gave it a shot. I used a heat gun on low temperature to just raise the temp a little and then picked at the decal with my fingernail. It peeled right off. I saw plenty of people online say that the heat gun isn’t necessary if the decal is pretty new. I put some Goo Gone over the area and there was no sign it had ever been there.

I also removed the EcoBoost badges from under the side mirrors. That was a little trickier because they had some bulk to them. I used a piece of floss in a sawing motion to loosen it up and then the badges fell off. They left behind a sticky pad which peeled off in one piece. Again, Goo Gone helped clean it up completely and voila. Done!

The other badges on the truck have holes through the body so if I can’t remove them without a lot of extra work.

Below is a photo of what the truck looks like now, and here is a link to a photo of it before in case you need a reminder. 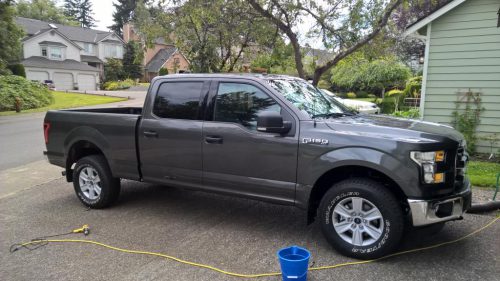 Good news, my bicycle now has an EcoBoost engine in it.