A lunch question ended up posing the question in the title. We were talking about which countries ate bacon and which ones didn’t. Then we had a hunch that the US and European countries near the top of the list so you could probably make a clickbait news story about how countries that eat more bacon make more money.

When we got back to our desks, Durmus had actually run the numbers. Unfortunately there’s only a 0.43 coefficient of correlation between per capita bacon consumption and per capita GDP. It was worth a shot though. And I had no idea that the Chinese ate more bacon than Americans! Step up your game people! 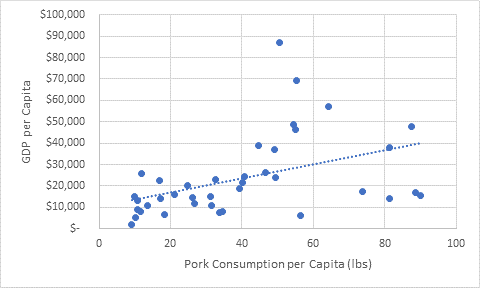