Ever since Elijah was born, Tyla and I have talked about if and when we’ll go to Disneyland for vacation. We know that we’re probably not going to end up being frequent Disneyland visitors so we hemmed and hawed a lot about what year would be a good one, but eventually, we pulled the trigger and put Disneyland into the 2018 budget.

This post is going to be a bit like when a relative sits down with a huge photo album, but hey, at least you can skip through this without hurting my feelings. Note that you can click on any of the photos for a bigger version.

Planning a trip to a Disney resort felt overwhelming. Neither one of us has ever been there. (I was at Disneyworld when I was in kindergarten.) So many people have been there and they all have opinions. Searching around on the web reveals endless websites, videos and podcasts telling you the right way to do it. I ended up reading The Unofficial Guide to Disneyland mostly because it had good reviews on Amazon and it was available for free as an ebook from our library. I got so much out of it, that I ended up purchasing a physical copy of the book too. The book covers everything from hotels to rides to food and more. There’s an incredible level of detail if you really want to maximize your trip (for example, stand in entry line X when entering the park because people end up forming one line but when you get to the tree it splits into two lines so it moves twice as fast.) But for me, it was simply nice have a full picture from a single source. I took lots of notes on my first read of the book and then went back to reread some of the sections again.

We decided to pony up for one of the official Disney hotels and we booked a room at Disneyland Hotel. We even upgraded one notch to get a pool view instead of a parking lot view. If you stay outside the park, you can stay close and get a bad pool or stay farther away and get a better pool. Staying in the park gives you both. A good pool was important because our plan was to spend two days in the park with a day at the hotel/pool in between. Staying in a Disney hotel also gives you early access to the parks on certain days.

To figure out dates for the trip, I went back to the book, or rather, to the website associated with the book: touringplans.com. I spent a couple bucks and bought a one year pass to the website. They’re a bunch of data science geeks who happen to love Disney so they have built up a sophisticated model to predict traffic at the various resorts and even wait times on every ride. I used their data to pick relatively low traffic periods (and low hotel price periods) that coincided with our availability.

Once I had the dates, I found our flights and a shuttle service between the airport to the hotel that wouldn’t require us to bring a car seat for Elijah.

The next step in the planning process was going through all the various rides and trying to come up with some sort of a plan going in. I narrowed it down to the rides that I thought Elijah would enjoy (nothing to dark, nothing scary, nothing too intense, etc.) Then I plugged them all into the Touring Plans website and it created an optimized route for us based on our walking speed, predicted waits for every ride, etc.

The final step of planning was figuring out food. I heard from multiple people that you need to make reservations for your meals if you’re planning to sit down and eat. I picked out one character dinner for our day off and then booked a meal at a restaurant in each park for dinner.

Two Days Before We Left

I was on my way home from work on Friday when I got a text from Tyla telling me to come straight inside as soon as I got home because Elijah had a big accident on his bike. He was zooming down the hill in front of our house and ended up going over his handlebars. He scraped his face across the pavement and came to a stop. He ended up with pretty bad cuts around his eye and a big swollen lip.

Thankfully there was no permanent damage (other than a slightly chipped tooth which we did get checked out when we got back). That was less less than 48 hours before our plane was scheduled to leave so you’ll see some sores on his face in the pictures. It was incredible to see how quickly he healed. Seven days later, you could barely tell he’d had an accident!

There are three Disney hotels and Disneyland is the second closest to the park entrance. It has a nice pool with some good water slides. In our final minutes of swimming on the trip, Elijah finally got up the courage to try the yellow one (the middle of the three intensities.) He did great and wanted to do it a million more times. 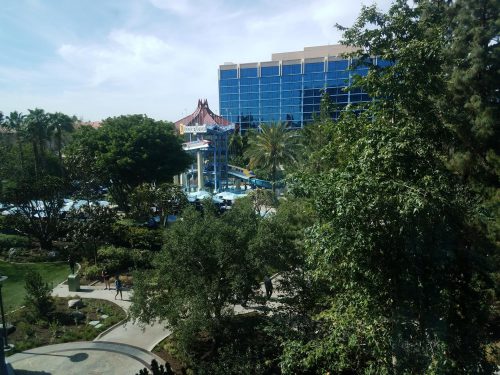 We were in Frontier Tower on the third floor facing the pool. It was a reasonably nice view and we were able to see some of the fireworks in the park every evening. The room felt nice and big. The highlight was the big headboard that stretched across both beds. It had the castle drawn into it and when you flipped a switch on the nearby lamp, lights came on that looked like fireworks. 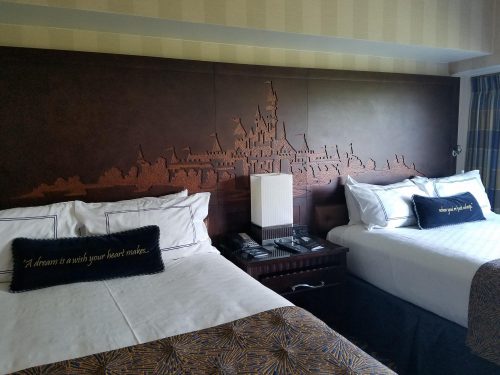 One of the buildings that was part of the hotel also housed Goofy’s Kitchen which was the site of our character dinner. We did that on our day at the hotel/pool so it was convenient to not have to go very far for dinner. The dinner was the most expensive frozen kid’s food that I’ll ever eat, but it was fine if I thought of it as private time with 5 characters. As a surprise bonus, Mickey was there and we got to take our picture with him as we checked in with the hostess. Throughout the meal we got to take pictures with Goofy, Minnie, Pluto, Chip and Dale. If I had that to do over again, I’d probably book breakfast or lunch since I think the characters are similar but the meal is a little cheaper. 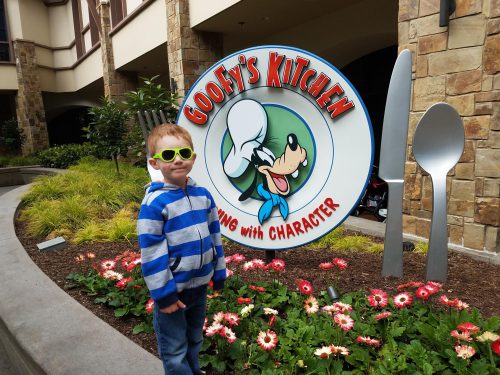 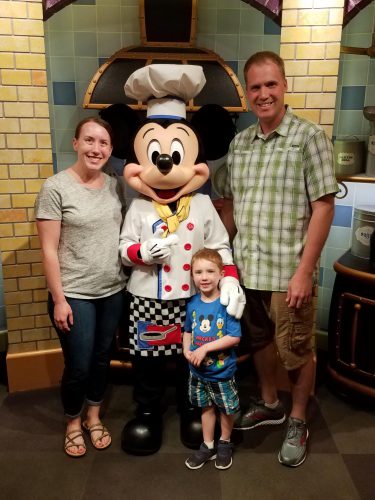 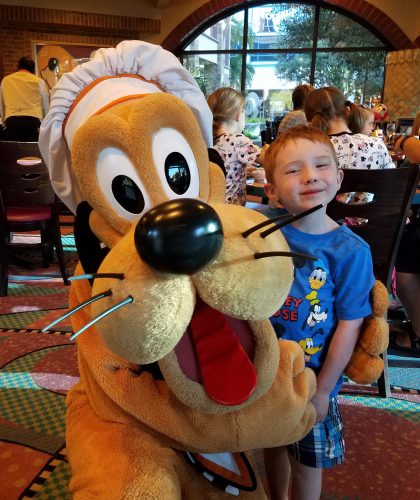 We arrived at the hotel Sunday afternoon and then spent all of Monday in the park. The park opened up at 9am (no Magic Hour early entry that day). We had decided to use the park’s stroller rental instead of other options, so we walked from the hotel to the park entrance and arrived at about 8:30. We picked up our stroller and walked into the park around the time it opened. (The stroller rental opened a bit later than normal for some reason.)

We walked up Main Street with smiles on our faces and headed through the castle for our first ride: Peter Pan. No deal. I think all the people and excitement were too much for Elijah. Looking back, I shouldn’t have been quite so ambitious on the first attempt. There’s no way for him to see what he’s getting into with that ride since it’s all inside. No worries. We scrapped that and moved on. We were there for a fun family time, not to ride every awesome ride. Here’s how the rest of our day shaped up. It’s pretty close to what I had planned on the Touring Plans website, but we definitely moved slower than I thought we would. No problem though, I was able to use the app to re-optimize our remaining rides. That app saved us a lot of steps and a lot of time. 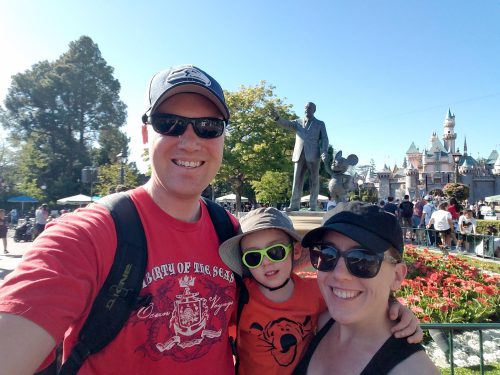 As I mentioned earlier, Tuesday was our day to rest, hang out in the pools and go to the character dinner. Wednesday was another park day and this time we got to use the Magic Hour at Disney California Adventure. We were near the front of the line and got to walk into the park with the first wave of people.

Our first ride was in Cars Land and before I get to the rides, I have to stop and talk about how amazing Cars Land is. That movie has gotten a lot of air time in our house, so maybe we’re biased, but I think all three of us would pick that as our favorite area of either park. The detail is incredible and it’s a blast to walk through the town that looks so much like the movie! 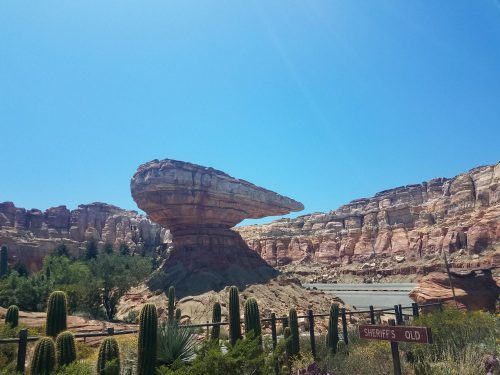 Throughout the day, we took a lot of photos including Lightning McQueen, Mater and Red. The cars must have had people inside to drive them because they could also hear what the kids were saying and use canned movie quotes to respond to the kids. Elijah loved Lightning and Red but I think he was a little intimidated by Mater’s big teeth. 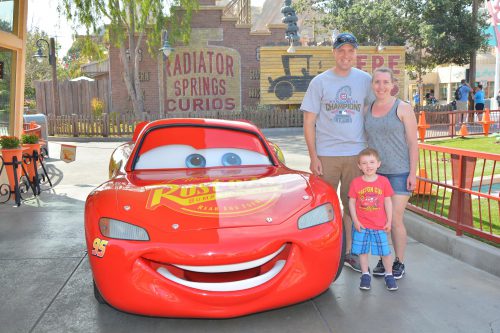 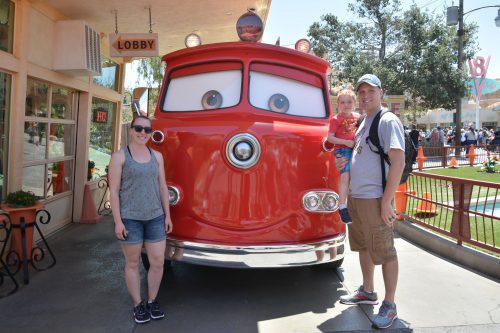 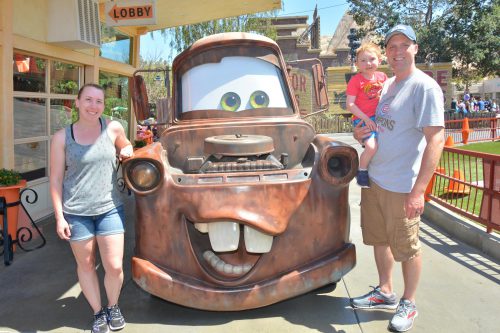 That was a lot of detail about a bunch of rides that you maybe have never heard of. How about some more general impressions?

4300 words later you’ve probably gotten the idea that we did a lot of planning for this trip and it turned out even better than we hoped. The plan let us ignore a lot of the stuff that didn’t fit our family goals and focus on the areas that would be fun for us. I didn’t have to constantly worry that we might be missing something fantastic and we knew that with two days in two parks, we’d never come close to seeing it all. The goal was to leave wanting more and we succeeded, but I also think that a third day in the park might have been too much. Two was perfect for us at this point in our lives, and while I don’t expect us to do this again soon, I bet we’ll be back at some point.

Thank you to all the wonderful people at Disneyland for making our trip so memorable!