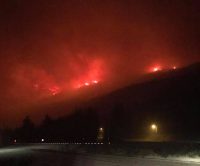 It’s wildfire season around here and this has been the Summer of Smoke. Winds have been blowing slightly differently and we’ve had a lot of VERY smoky days with low visibility and terrible air quality. One day the smoke was so thick that it blocked out the sun completely and it was raining ash.

There are a lot of big fires in the area, but the one I’ve been following is the Norse Peak fire. You can read all the details on the inciweb page or in various news articles, but the basic info is that 13 separate fires were ignited by lightning on August 10 and 11. Those quickly combined and threatened, among other things, the Crystal Mountain ski area. They were forced to evacuate everyone and the smoke was so thick that they couldn’t bring in helicopters for water drops. Even firefighters were evacuated at one point because they were in danger of having their exit route cut off by the fire. At the worst point, fire was visible coming down the ridge just north of the base area.

Thanks to incredibly long hours by various fire departments, no structural damage has occurred to the resort yet. It sounds like they are getting the fire under control now. We had a small amount of rain and winds have shifted so that the smoke is clearing out. It does sound like they will be closed for the remaining couple weeks of the summer season. Follow their Facebook page for updates.